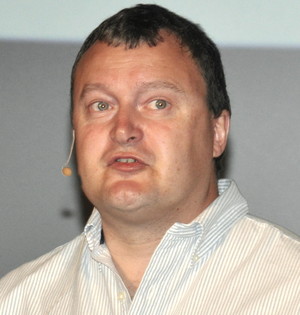 It’s not just journalism that has an open future: there are fundamental changes going on in many areas as a result of new technologies, he pointed out. Open is a theme in science with the genome project, for example, or in computing technology with Linux, academic publishing with the Wellcome trust’s efforts, and even in governments as they embrace open data.

What does this mean for journalism? It doesn’t mean that the voice of the journalist is less relevant, Miller emphasized, but it means that you can supplement this strong voice with other views.

The Guardian’s Open Newslist is an important experiment in open journalism, Miller said. “We encourage people to interact with it, and we are also trying a live blog of what we are discussing during the day.” Information from this was crucial for a recent Falkland Islands story, he added.

Open journalism has clear commercial implications, Miller said. The Guardian has gone from being a UK paper with 300,000 readers to a global news organisation with 65 million unique users, he said. He described the kind of users that open journalism attracts as ‘progressives:’ forward-looking individuals who are curious about the work and embrace change and technology. This is an attractive audience to advertisers, Miller believes.

Most of these progressives already use at least two platforms to read news and therefore it is essential to offer Guardian content across platforms, Miller said. You can’t just reformat your content for different platforms, he stressed, however: “you have to design the products for different platforms.” The Guardian did not immediately release an iPad app, he added, because the paper wanted to create something that suited the product.

The Guardian’s print circulation has gone done by 11% over the past two years, while the online audience has grown by 67% and the mobile by an impressive 737%, Miller said.

Facebook is also a very important platform for the Guardian, Miller stressed. By building a Facebook app and using Facebook widely to promote content, the paper is reaching more 18-25 year olds than ever before. As yet, the Guardian’s social efforts are not directly bringing in revenue but the platforms are complementary as they attract new audiences, as well as attracting existing audiences at different times of day.

Miller explained that he is not totally against charging for digital content, pointing out that the mobile and tablet apps are subscription-based, but he was clear that the paper believes that putting up a paywall on the website would mean losing the younger audience and returning to focus on the paper’s old, loyal audience of 300,000 print readers.