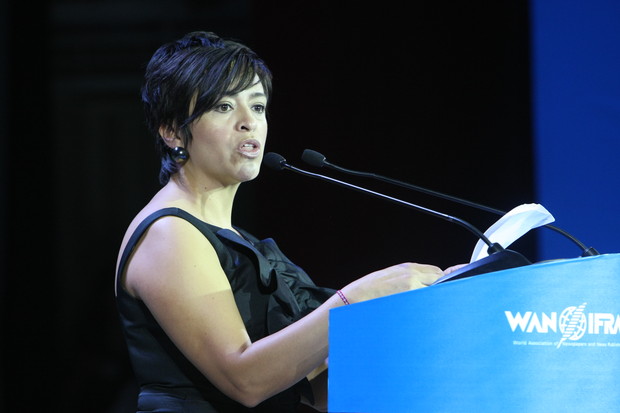 Ms. Hernández was honoured for her commitment and dedication to investigative reporting that revealed corruption at the highest levels of Mexican society and has placed her life in danger.

“Personally, this award is a light that shines on my dark path, a light in the lonely and unequal struggle between a journalist and a whole apparatus of corruption,” said Ms Hernández, accepting the award during the opening ceremony of the 64th World Newspaper Congress and 19th World Editors Forum Monday in Kiev, Ukraine.

WAN-IFRA has presented the Golden Pen of Freedom since 1961 to recognise the outstanding action, in writing or deed, of an individual, group or institution in the cause of press freedom.

“In presenting this award, WAN-IFRA recognises the unyielding stance Anabel Hernández has taken, at great personal risk, against drug cartels, organised crime and corrupt officials,” said Erik Bjerager, President of the World Editors Forum, who presented the award. “Her actions have helped ensure the development of high quality, unrestricted investigative journalism in the region.”

WAN-IFRA again called on the Mexican authorities, and in particular in-coming President-elect Enrique Peña Nieto, to take urgent measures to end the violence against journalists.

More on the Golden Pen of Freedom can be found at https://wan-ifra.org/microsites/golden-pen-of-freedom.