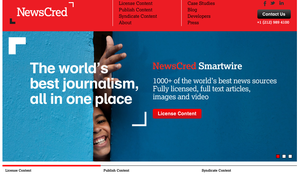 In an interesting development, the largely automated NewsCred, which licenses and syndicates content from publishers to other publishers and to brands such as Pepsi and Johnson & Johnson, has added the human touch with an eight-person Editorial Curation team, according to a report yesterday from Jeff John Roberts on paidContent.

NewsCred, which just a few weeks ago was named among “publishers’ favorite startups” by Digiday, boasts an impressive list of content partners that includes many of the world’s top publishing companies, such as AP, AFP, Bloomberg, Reuters, Al-Jazeera, CNN and the Financial Times to name only a few. More partners are being added regularly, for example, the GigaOM Pro Blog reported The Washington Post signed on just last month.

The company describes itself as “the only global company to offer publishers and brands a full end-to-end content solution.” The addition of the human editorial team gives another dimension to NewsCred’s already impressive offerings.

Roberts writes that “The idea here is that clients who buy access to NewsCred’s fire hose of news stories can now have a personal editor who has real-life newsroom judgment — such as what type of story should be at the top of a page and for how long.”

Founded in 2008, NewsCred now has more than 45 employees and offices in New York, London and Dhaka.