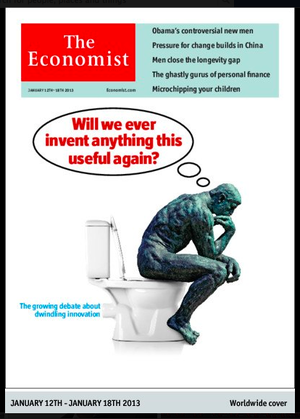 The Economist, the shining star among weekly news magazines, sells more than 1.5m print copies but fully expects this figure to decline, said Tom Standage, the publication’s digital editor in an AMA (Ask Me Anything) Q&A session on Reddit. So far print circulation hasn’t started to fall, even as digital-only subscriptions grow, “but it will,” Standage asserts.

“The important thing for us is to deliver distinctive content that readers will pay for; whether it’s on paper or a screen, or in audio format, is not really the point,” Standage said. “Our aim is to deliver our content in whatever form our readers want it; we are not wedded to print.”

So far, The Economist has 150,000 digital-only subscribers, and a total of 600,000 people use the paper’s mobile apps each week. Seventeen per cent of traffic comes from mobile, and The Economist is “retooling” its site to make it more mobile-friendly, Standage wrote, mentioning that “we will be doing some slightly more daring stuff shortly.”

The tablet edition has deliberately been built to look like the print edition “because we know Economist readers are often creatures of habit who read The Economist in a particular order and we wanted them to be able to bring their print habits to digital,” said Standage. And this is exactly what the app allows, it is clean and straightforward, without a wealth of multimedia features, but does allow users to listen to the entire edition as well as read it, which is an advantage for those on the move. “Audio is one of the things people really love about our apps,” Standage said in the Q&A, and the large size of the audio file is a reason why a move to a web-based HTML5 app might be difficult.   The website does look very much like a news site, and contains blog posts as well as the articles from the print publication, and structured online debates.

Digital could mean more significant changes in the future, however. As Standage said, the succinct nature of the paper’s articles is “enforced by the discipline of fitting articles onto print pages” and if this constraint were no longer relevant, The Economist would need to find a new way to define them.

About 10% of The Economist’s mobile traffic comes from social media, Standage said, but emphasized that social media’s importance for the paper goes beyond this figure, as it helps counter the impression among those who don’t know it as a publication focused on economics, and “lets us reach people who would otherwise not encounter our content.” The Economist is particularly successful as it is a ‘badge brand,’ Standage believes: people like to let their friends know they are reading it.

As fellow weekly news publication Newsweek goes digital-only and looks towards a precarious new existence, the future of The Economist seems more secure than ever, both in print and digital, despite Standage’s insistence that print numbers are at their peak and must fall. By the time they do, the paper is likely to have a stable digital business, unlike many of its daily rivals.