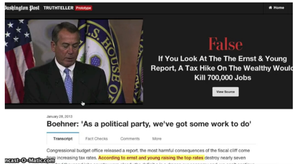 The Washington Post has developed a prototype of a news application that could be used to fact-check live speeches and debates. The app is called Truth Teller, and it was built with funding from the Knight Foundation’s Prototype Fund.

According to the paper’s executive producer for digital news, Cory Haik, the project was inspired by politics editor Steven Ginsberg’s visit to a Michele Bachmann rally in August 2011, where the politician repeatedly misled her audience. Ginsberg realized that nobody in attendance seemed to be know they were being misled, and thus the idea to create a real time fact checking device was born.

The app combines “video and audio extraction with a speech-to-text technology to search a database of facts and fact checks,” said Haik. So while a politician is giving a speech, the tool can take the audio from the video, convert it to text and match that text to a database of facts, which the paper is in the process of building. Washington Post readers can watch a video on the site, and when facts are identified as true or false, they will pop up onto the screen, with a link to the full fact-check.

The prototype tool was built in three months and focuses on the upcoming debate over tax reform in the US. “We hope that our application will help direct the conversation toward the truth as it is happening so that Americans get a fair shot at deciding this critical issue,” wrote Haik. There are several videos currently on the Truth Teller site to show how the app works. “We’re tuning the algorithm as we go,” wrote Haik.

Knight’s Prototype Fund offers up to $50,000 to build and test new ideas in news and information. “The cost and time requirements of quickly testing digital projects continues to fall, and it’s almost more expensive to not experiment, test and improve a prototype,” said Michael Maness, vice president for journalism and media innovation at Knight Foundation, in a press release. “We plan to find more projects like Truth Teller this year as we seek to accelerate the field of media innovation.”

Intensive fact-checking, pioneered by initiatives like Politifact, has become more and more common at news organisations, particularly during pre-election periods. But it is most often carried out by reporters and editors and is therefore both labour-intensive and a time-delay is inevitable. Could this kind of automated technology prove revolutionary in assessing politicians’ truth-telling capacity? Or will it never reach a level that can compete with human expertise?