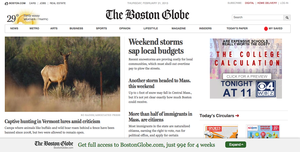 The Boston Globe has been making the news as well as reporting it several times in recent days, the latest headline story being that its parent company, The New York Times Co, has put it up for sale. The Times paid $1.1bn for the newspaper in 1993 and is expected to sell it for far less.

The decision “demonstrates our commitment to concentrate our strategic focus and investment on The New York Times brand and its journalism,” said Mark Thompson, the NYT Co’s president and CEO in a press release. The plan to sell the New England Media Group would also mean divesting of the Worcester Telegram & Gazette, and the two paper’s related digital properties.

“Given the differences between these businesses and The New York Times, we believe that a sale is in the best long-term interests of these properties and the employees who work for them as well as in the best interests of our shareholders,” Thompson continued. He took up his position in November, after leaving the top post at the BBC.

Poynter’s Andrew Beaujon takes a look at “Who will buy The Boston Globe?” here.

As Jeff John Roberts reported on paidContent, The Boston Globe has managed to reach a total of 28,000 digital-only subscribers in the year and a half since it put up a paywall.

This figure may seem small at first glance, given that Boston’s metro area holds 4 million people said Roberts (compare to the NYT’s 640,000) but both the paper’s publisher, Christopher Mayer, and industry analyst Ken Doctor disagreed. Doctor told Roberts that the figure was good compared to other papers.

The arrival of the paywall coincided with a new two-site strategy for the Globe, which took its premium content from its existing portal Boston.com to create BostonGlobe.com. Boston.com has always included content from other sources and now acts more as a community information portal, while BostonGlobe.com presents the newspaper.

It is a distinction which has not been clear to all, new Boston Globe Editor Brian McGrory admitted to Poynter last week, and he sees his first job as to untangle the two. Boston.com will feature increasingly fewer full stories from the paper, he said, with 150 word previews that will hopefully entice people to pay for the premium site.

The paper has also been taking in startups and others to make use of unoccupied office space after downsizing.

It is not the first time that the NYT Co has put the Globe up for sale. In 2009 attempts to sell were halted after cost-cutting measures were implemented and concessions struck with unions. But this time there seems to be a clearer strategic motivation, and company has already got rid of other non-Times brands such as About.com and all other regional papers. How would a sale affect the paper’s future?