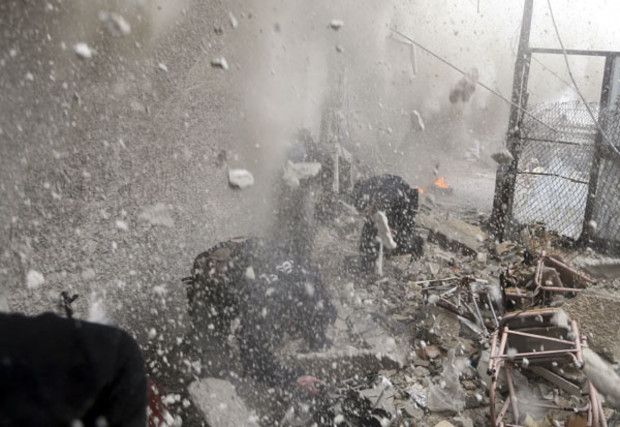 Photo credit: Reuters. Photographer Goran Tomasevic writes that he’s come into the line of fire while on assignment in Syria.

British newspapers including The Sunday Times, The Times, The Guardian, The Observer and The Independent are rejecting freelance work from Syria, according to Press Gazette.

Photojournalist Rick Findler told Press Gazette that a representative from The Sunday Times recognized but declined his “exceptional work” from Aleppo, claiming, “We have a policy of not taking copy from Syria as we believe the dangers of operating there are too great.”

The Committee to Protect Journalists listed Syria as “by far” the deadliest country for reporters last year, with 28 killed on assignment. Among them was Marie Colvin, a Sunday Times staffer. Deputy Foreign Editor Graham Paterson told Press Gazette that Colvin’s death influenced their new policy, which he said was a “moral” decision.

“[Accepting freelance work] could be seen as encouragement to go out and take unnecessary risks in the future,” Paterson told Press Gazette. “The situation out there is incredibly risky. And we do not want to see any more bloodshed. There has been far too much already.”

Paterson emphasized that the policy does not mean The Sunday Times does not value coverage of Syria — a team of staffers specifically trained and outfitted are submitting reports from the war zone, he said.

Eddie Mulholland, vice chairman of the British Press Photographer’s Association, said it is more ideal for commissioned staffers to report from such dangerous territories, as “the backup of a large organization that can pull out all the stops for you if things go wrong is certainly preferable,” he told Press Gazette.

Photographer Warren Allott, who recently returned from Syria, said Syrian gangs see Western journalists as “top prize” that they sell for huge ransoms, and newspapers can safely deliver their staffers from such situations, according to Press Gazette. Without that backing, freelance journalists are in danger, he said.

But Findler, whose online biography says he’s travelled to Northern Iraq, Libya and Syria and has been published in The Guardian, The Sunday Times and The Wall Street Journal, said he is “disheartened and extremely let down” by the newspapers’ new policies.

“Surely it is that photographer’s decision to choose whether or not they take the risks,” he told Press Gazette. “I thought part of photography was the fact that some people in this world do take exceptional risks to show the rest of the world what is happening.”

Other photojournalists are similarly upset by the news. Bruno Stevens said he understands that many naive journalists go into war zones without proper training experience, but an official policy against freelance work from Syria “seems to go too far,” he said.

“If that leads them to just take photos from the wires, quality journalism will be hurt,” he told the Committee to Protect Journalists.

“If a major actor like The Sunday Times withdraws from the market, it will become more difficult for the younger generation that was born with the Arab Spring to move ahead,” he said, later adding, “This generation has demonstrated its hyper-reactivity and sophisticated use of technology and social networks, and it deserves a chance to be published.”

Two journalists have already been killed in Syria this year, according to the Committee to Protect Journalists. Two American journalists are still missing from last year: Austin Tice since 13 August and James Foley since 22 November. Additionally, NBC News foreign correspondent Robert Engel was kidnapped for five days in December before being safely released.