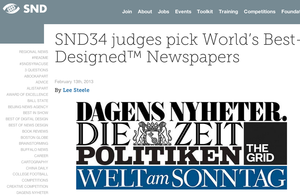 The Society for News Design yesterday announced the winners of their latest annual competition and named five newspapers as “World’s Best-Designed.”

The winners for 2012, with links to the SND judges’ comments, are:

European newspapers dominated the award this year, and four of the five winners had won the honour at least once in the past. Germany’s Die Zeit received the award for the sixth time (it won previously in 1998, 1999, 2001, 2002 and 2004)

The Grid and Politiken both also won the award last year (Politiken won in 2006 as well), and Welt am Sonntag previously won in 2008.

“What distinguishes a World’s Best-Designed™ Newspaper? A culture of careful editing of all content that puts the reader first — through stringent attention to detail,” the judges said in a statement that accompanied the announcement of the winners.

The statement concluded: “In the five publications we selected, details elevated them from their peers. In these papers, every page counts. These staffs perform an extra layer of editing to refine and strengthen the final product. Ultimately, these winning newspapers have been brainstormed, edited and curated for readers. They add analysis and context and serve to connect readers to their larger community.”

In 1994, SND added the “World’s Best-Designed” category to its annual “Best of News Design” competition, which is now in its 34th year. From 1994 through 1998, a dozen or more newspapers earned the title each year, but since 1999, the number of winners has dropped by more than half. Most years since then have seen five titles selected each year, but some years have had even fewer winners: 1999 and 2009 each only had three. There were just two winners in 2005, and only one – Portugal’s i – claimed the title in 2010.