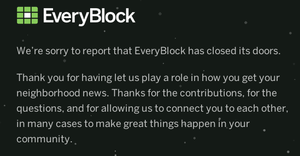 Hyperlocal news websites in the US took a bit of a beating this week.

First came the news yesterday that NBC has abruptly closed EveryBlock, a sad move that seems to have surprised about everyone, including Adrian Holovaty, who founded EveryBlock in 2007 with a staff of four after receiving a Knight Foundation grant.

The EveryBlock websites covered 19 large US cities, beginning with Chicago, and were heavily automated using algorithms and public records data to provide a wealth of block-by-block information. Over time, EveryBlock also introduced ways for residents to share information with each other, such as utilities being out in a particular area. In a blog post in early November, EveryBlock staffers noted ways that neighbours had used the sites to connect and share information during Hurricane Sandy.

Holovaty left EveryBlock last August, but stated in a blog post Thursday: “I had no idea NBC News would be shutting it down (in fact, at the time, I said I expected it would be around for a “long, long time”). The last time I talked with an NBC News representative, at a conference a few months after I left EveryBlock, he indicated that NBC was optimistic about the site’s future.”

NBC Senior Vice President and Chief Digital Officer of NBC News Vivian Schiller told Poynter’s Jeff Sonderman that “We looked at various options to keep this going, but none of them were viable. It was a tough call to make.”

In a second development, it was reported today that while overall AOL earnings were up considerably in the fourth quarter of 2012, Patch, the company’s hyperlocal network fell rather short of expectations.

“Six months ago, CEO Tim Armstrong said Patch’s 900 or so sites would take in $40 million to $50 million in 2012. The actual total came in at $34 million,” writes Jeff Bercovici on the Forbes website.

One recent bright spot in the hyperlocal arena was the announcement in late January that Chicago-based Tribune company’s TribLocal has redesigned its websites and print editions and will have a sharper focus on its communities.

TribLocal, which launched in 2007, includes several dozen websites as well as a number of weekly print editions targeting the Chicago suburbs. TribLocal’s sites are also competing head-to-head with Patch websites in communities throughout Chicagoland.