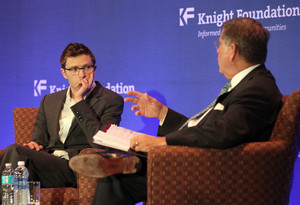 Update, Feb. 15: The Knight Foundation apologized for paying Lehrer to speak. A blog post reads, “We regret our mistake” and “should not have put [the foundation] into a position tantamount to rewarding people who have violated the basic tenets of journalism.”

Jonah Lehrer, the journalist found to have fabricated several Bob Dylan quotes last summer, accepted $20,000 to speak Tuesday about the plagiarism that led to his resignation from The New Yorker in July.

It would be easy to watch the speech at the Knight Foundation’s Media Learning Seminar and turn your nose up, casting Lehrer aside as a journalistic eyesore. But the news industry as a whole cannot consider itself blameless: As Charles Seife noted in his Slate article exposing Lehrer’s journalistic sins, what’s most shocking about the situation is not what or how much the reporter stole, but how long it took anyone to notice. Equally worrying is how confident Lehrer seemed that his fabrications would elude his editors and fact-checking teams.

Lehrer said Tuesday he’s “convinced” that he must speak publicly about his transgressions so that the lessons will last, and he’s right. The journalism community needs a reminder of the importance of fact checking.

While Lehrer’s editors may not have actively looked the other way from his plagiarism, clearly the appropriate level of fact checking was not met. As Seife’s exposé pointed out, many of Lehrer’s plagiarisms were blatant, entire paragraphs copied and pasted from other writers and his own previous articles. But it took almost two years from his first noted plagiarism for his misdeeds to come to light.

This scandal comes at a most inconvenient time. The public’s “believability” rating of the press has fallen to about 56 percent, according to an August report by the Pew Research Center for the People & the Press. In 2002, that rating was 71 percent.

So while some may criticize the Knight Foundation for paying this plagiarist so handsomely (though the sum is less than some speakers are paid, Knight’s president said), Lehrer provided a priceless lesson: With copy-editing teams being slashed, we must stay attentive to fact checking so the public can continue to rely on the press for accurate coverage.

A “confession is not a solution,” Lehrer said Tuesday. No, the solution lies in the journalism community’s response to Lehrer — not mockery, like the stream of derisive tweets that flashed on a screen beside Lehrer during his speech, but heightened vigilance.