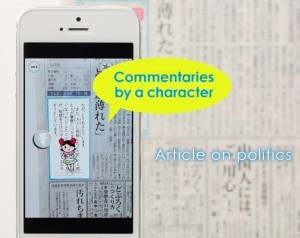 For a one-day trial, Dentsu worked with newspaper staff to convert nine stories in the paper into a more easily understood format that became visible when a child held a smart phone over the original story. An animated character helped explain the story, which appeared in an alphabet more easily understood by children. You can see a video about the demonstration HERE.

Continuing to use the app to help children better understand the news is under discussion, according to Yoshiro Kurauchi, head of the project for Tokyo Shimbun.

Using a smartphone to help children understand printed newspaper content represents a digital variation of a prize-winning feature of a Brazilian newspaper, Zero Hora. That paper has long published short “For your Child to Read” summaries with important stories. That work won a WAN-IFRA World Young Reader Prize for editorial innovation and attracted advertising that covered a journalist’s salary.

For companies that want children to experience news in print, this approach could make sense as it encourages parental involvement in the child’s news reading, helps parents become a bit more tech savvy and opens the way for both advertising and for a child to notice other elements of the newspaper.  However, it seems labor intensive and potentially hard to do on a daily basis, even at a paper where the technology is in place. For example, the child-targeted texts in Japanese are actually longer than the original versions because of the nature of the easier alphabet.