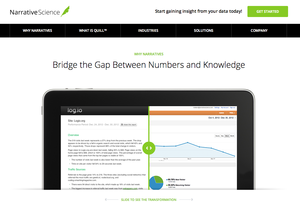 In the wake of EveryBlock, VillageSoup, TBD and Bayosphere folding, Patch cutting staff and Daily Voice closing sites and decreasing its budget by 70 percent, according to BuzzMachine, hyperlocal news sites are searching for new business models. Robot reporters may be the answer.

Narrative Science was founded in 2010 as a result of research from the Intelligent Information Laboratory at Northwestern University. Founders Kris Hammond and Larry Birnbaum, professors both of computer science and journalism, developed an algorithm that news outlets such as Forbes and Big Ten Network now rely on for data-based blurbs about finance and sports. The algorithm takes stats and spits out stories that are nearly indistinguishable from journalist-authored prose. While the technology results from over 10 years of research, only recently did it advance to the point where it could fool someone into thinking it was written by a human, The New York Times reported. While these stories “will not be winning many Pulitzers,” Emily Bell of The Guardian writes, they can free up resources to allow journalists to pursue more investigative stories.

The intent is not to rob journalists of their jobs but to expand news coverage to include events as trivial as little league games. “Mostly, we’re doing things that are not being done otherwise,” Stuart Frankel, chief executive of Narrative Science, told The New York Times. And with hyperlocal news sites closing, local angles aren’t always being covered.

The Los Angeles Times uses similar technology to automatically publish news about crime, according to Journalism.co.uk. Stories like this one of an earthquake in February go live without the need of an editor’s revisions. Ben Welsh, L.A. Times database producer, calls the technology “human-assisted reporting,” but it may be more than that — if used properly, the technology could be used to generate content for hyperlocal news sites without the need of an reporter’s touch (or salary, for that matter).

The technology is much cheaper than relying on a team of reporters. In September 2011 rates were about $10 for a 500-word article, The New York Times reported. That price tag is significantly lower than it would be if the story were authored by a reporter. Additionally, the technology is fast — only seconds after the buzzer sounds in a basketball game, Narrative Science can post a summary.

Jeff Jarvis estimated that 150 bloggers would be needed for every three towns in New Jersey to share one local news site, which would mean an increase in the current number of bloggers in the state by a factor of 10. Jarvis said that this would be a near impossibility, as few would be “willing to do this hard work and to risk and sacrifice better paying alternatives (read: PR or flipping burgers, for that matter).” But what’s impossible for humans, in this case, is a perfectly reasonable request for a robot, which Frankel called a “meta-journalist”: a being that can compose millions of stories rather than focusing on one at a time. In fact, as of April 2012, every 30 seconds Narrative Science published a story, according to Wired.

However, some predict that readers may reject robot-written stories if they recognize them as such. This may be especially true in the case of hyperlocal news sites, which are often hallmarked by being run by journalists deeply rooted in their communities.