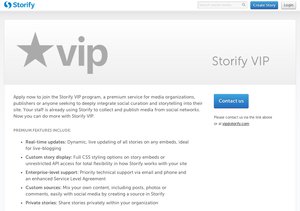 Updated 2 April to include interview with Burt Herman.

Storify recently answered the ongoing question of how the site would monetize its social media curation and story platform: Storify VIP, a subscription service that allows publishers to unlock advanced features.

“Many major media organizations, brands and non-profit groups users have come to Storify organically for its basic functionality,” Co-founder Burt Herman said. “But it’s been clear for a while that our professional users had these needs and we’ve been thinking about how to serve them, which is why we’re launching this service now.”

Created in 2011, Storify says its new service will allow clients — media, publishers “or anyone seeking to deeply integrate social curation and storytelling into their site” — to customize embedding of Storify features and easily update creations in real-time. Clients will also get “priority” technical support, the ability to share stories internally within their companies and integrate custom content into Storify pieces.

46,000 publishers, including The New York Times, CNN and The Washington Post, embedded Storify features in their sites last year, The Next Web reported, leaving many curious how the site, which is currently ad-free, would turn a profit. Earlier this year the company hired Don Loeb, formerly business development executive at Adobe, and Storify VIP seems to be the solution Loeb, the company’s first sales person, helped determine.

“We’ve been very fortunate to have so many amazing users embrace our service, and we are happy to work with them to keep growing in a sustainable way for the future,” Herman said. “While this is one business model that we are launching, we also are looking to other ways that we can help our publishers earn more revenue with the work they do on Storify.”

BBC is among the first subscribers to the new service. Radio 2 used the paid-for features to customize a live blog last month, TechCrunch reported.

Herman said VIP will not affect Storify’s free service, which has 600,000 registered users. Additionally, enthusiastic response to VIP has prompted the creation of a separate “Pro” package, which will offer several of VIP’s features to smaller organizations. Details about the Pro plan will be announced soon, according to Herman.

Costs will vary for each publisher, but Herman said prices will be “enterprise-level.” Publishers can get more information and sign up for the service here.