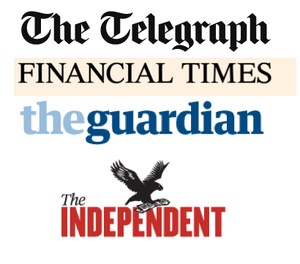 Earlier this month The Telegraph announced intentions to cut 80 positions as the newspaper moved to share resources with its Sunday operation, The Guardian reported. These layoffs signify a 14 percent reduction in staff, which previously consisted of 550 editorial workers. The redundancies will be met with 50 new “digitally-focused” jobs, resulting in a net loss of about 5 percent. Most of the job losses will come from The Sunday Telegraph rather than the weekday operation.

Chief Executive Murdoch MacLennan said the merger shows the newspaper’s digital-first ambitions, solidified with an £8 million investment “to complete our transition to a digital business,” according to The Guardian.

In February Managing Director Andrew Mullins declared the Levedev titles’ intentions “to become one of the very first truly integrated multimedia companies, publishing continuously on print, TV and other digital platforms.” He said that its soon-to-be-launched local TV channel London Live will share journalistic resources with other titles, according to MediaGuardian.

Mullins’ memo, obtained by MediaGuardian, was accompanied with the petition for voluntary redundancies. With the merge of The Independent and The Independent on Sunday, 17 total full-time equivalent jobs will be cut. A dozen general news reporters would be eliminated, the majority of which would come from the Sunday edition, according to Press Gazette. Five comment section staffers, for both web and print, will be axed, two from the visual department, and 2.5 production jobs. The arts and features staff will remain untouched, Press Gazette reported, leaving a total of 170 staffers between the two titles.

“None of this is easy or pleasant,” editor Chris Blackhurst wrote. “I’ve been on the receiving end of redundancy programmes here and elsewhere in the past, and I wish it was not happening. Nevertheless, we cannot ignore the digital revolution sweeping through our industry and the effect it is having on the way we go about our business.”

Reporters’ initial excitements at London Live’s launch were dampened with the news of subsequent job cuts.

“There’s some things that sound like it’s be fun and exciting – like the TV station – but then they announce at least 20 redundancies,” one journalist told MediaGuardian. “It’s more with less, yet again.”

The Guardian, The Observer

Management aimed to cut a total of 100 jobs between The Guardian and The Observer to save a total of £7 million annually, and about 50 editorial staffers volunteered, Press Gazette reported.

Staffers worry compulsory redundancies would begin to fill the gap, and 80 percent of National Union of Journalist members voted in favor of a strike if such actions occur, MediaGuardian reported.

Data released last week showed The Guardian was the only major UK news website to significantly increase digital traffic in February, marking a shift in priorities from print to web. The Guardian is notorious for championing a free and open internet model.

Financial Times declared a digital-first approach early this year after digital subscriptions surpassed that of print last summer. Now that mobile comprises a quarter of all digital traffic, it would be “reckless” to leave staff as is, editor Lionel Barber told Press Gazette, prompting the announcement of 35 redundancies.

“This is a big cultural shift for the FT that is only likely to be achieved with further structural change,” Barber said.

Saving money on print-centric staff — approximately £1.6 million — would allow FT to invest more online, Barber said. The redundancies will be offset with the creation of 10 new digital posts.

“The FT’s brand of accurate, authoritative journalism can thrive, but only if it adapts to the demands of our readers in digital and in print, still a vital source of advertising revenues,” Barber said. He later added, “This is not an easy transition, but we are obliged to take the difficult steps to secure the FT’s future as one of the world’s great news organisations.”