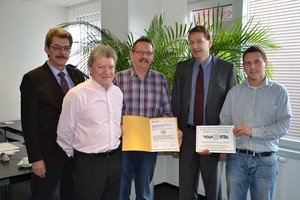 The process developed to obtain such certification involves more than the production of just a once-off printing sample. Among other things, the WAN-IFRA print quality certification process prescribes that a specific test element which is used also for the WAN-IFRA Color Quality Club Competition, is printed regularly and evaluated in the quality testing laboratory.

When conducting the on-site audit, the auditor begins by obtaining an overview of the quality-relevant conditions and processes at the printing operation, the production procedure as well as the working methods of printers and CTP operators. This is followed by various discussions with the departmental heads before the practical work starts. When preparing for the printing tests, different test forms are proofed, RIPped and imaged to plate. After printing, evaluation is done and the auditor summarises the results in his report.

In these tests, Druckzentrum Aschendorff obtained 1017.4 of a possible 1080 points in the four necessary certification categories, thus more than satisfying the specified requirements. The WAN-IFRA print quality certification
was presented by the auditor, Moritz Schwarz (WAN-IFRA), on 19 November 2012.

Schwarz praised the motivated team of specialists behind this success. “The existing quality control and steering tools  are the visible product of many years of focusing on quality, which plays a decisive role at the printing company. The innovative ideas about how to further optimise the existing processes as well as the cooperation with universities and organisations are not only of major benefit to Aschendorff, but also  to the industry as a whole”, said Schwarz and congratulated the company on its success.

WAN-IFRA has carried out quality certifications since 2005. The performed quality analysis is primarily based on the ISO and other quality-related standards for newspaper production. A printing operation can use certification to raise the level of know-how of its employees, optimise the work processes and enhance its reputation both in the industry and among its customers.