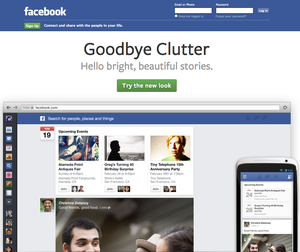 “Everybody already has a different experience,” Facebook founder Mark Zuckerberg said of the site’s new newsfeed during its launch Thursday. “Not like the [fictional] Monterey Daily.”

News publishers should take a page from the social networking site and individualize subscriber experiences.

With newspapers shifting to digital-first strategies, editors no longer need to focus solely on cultivating “one-size-fits-all” print packages, filled with editors’ choices of the day’s most important reads. While some stories are universally newsworthy, individual preferences should be accounted for when determining what is highlighted on a newspaper’s homepage. Just like Facebook, newspapers should employ “editing by algorithm,” as Nathaniel Mott called it, and personalize according to individual interests.  And with data-mining services such as Facebook, ascertaining which stories would be most appealing to an individual subscriber would not be difficult.

In fact, Facebook “likes” alone provide enough information to determine a user’s sexual orientation with 88 percent accuracy and drug use with 75 percent accuracy, according to The Guardian. As many news sites already encourage subscribers to log in via their Facebook accounts, surely profiles can be used to determine whether each user is most likely to read a story about Spain’s economic crisis, Princess Kate or the war in Syria. Even without Facebook log-ins, newspapers could use questionnaires to determine individual news interests and preferences.

Newspaper subscribers would also benefit from being able to “follow” an individual or issue the outlet covers, and related coverage should appear on tailored home pages. Didn’t check the news yesterday? Just like Facebook, newspapers homepages should keep tabs of when users log in and showcase highlights tailored to what they might have missed.

If users are greeted with personalized newspaper home pages, they will be more likely to personally connect with news outlets and thus more likely to justify paying to subscribe.