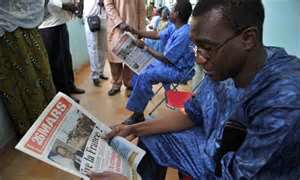 In a statement released March 11, Malian journalists declared a strike to demand the release of Boukary Daou, editor of the daily Le Républicain, who was arrested for publishing an open letter criticizing the living conditions of soldiers the salary of Captain Amadou Sanogo, leader of the March 22, 2012 coup that ousted President Toumani Toure.

Daou was arrested without charge since March 6 by the State Security, Mali’s intelligence agency. He is being held without access to lawyers or his family, and he has been beaten and interrogated about the source of the letter, according to media reports. After unsuccessful pleas to secure Dao’s release, media outlets initiated an unprecedented media blackout.

According to a BBC report, in the capital of Bamako where about 40 newspaper titles are published each week, none have appeared on news stands since the blackout. 16 radio stations have also gone silent, or just play music. However state-owned media will continue to run.

CPJ research shows in the past year State Security agents have detained and interrogated at least 12 journalists over articles critical of the government. Last week a radio journalist, who frequently reported on sensitive issues like government corruption, was stabbed in his home after receiving several threats.

Neimatou Coulibaly of the daily Le Combat told the Agence France-Presse (AFP), “Since the coup of 22 March, it seems [the government] is trying by all means to destroy the profession of journalism. There is intimidation, arbitrary arrests, and attacks. We are afraid of being attacked in the city.”

“It became a little more dangerous to do our work,” said Makan Kone, president of the Maison de la Presse, a federation of press associations in Mali. “We must be very careful and it is true that some colleagues are forced to self-censor,” he said to AFP.

Before the coup, Mali was ranked 25th in the world in terms of press freedom, according to Reporters Without Borders. In one year, the country has tumbled 74 places.

France’s army intervened in January to help the interim government restore state control over the north, which was run by Islamist rebels seeking to impose Shariah law in the country.