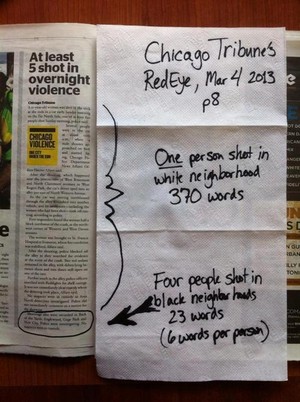 The photo of a Chicago Tribune column excerpted for Roundup use points out that the paper devoted more than 300 words to the story of a woman’s shooting in a “white neighborhood,” meanwhile news of four shootings in a “black neighborhood” are given 23 words all together.

RedEye’s response? Thanks and “we hear you.” Another Tribune staffer’s response, published by Jim Romenesko, was a bit more pointed: “The notion that journalists in a major metro’s newsroom would prioritize coverage based on race or socio economic [stet] status is laughable to anyone who has worked in such a place,” the unnamed writer said, adding that the woman’s story wasn’t highlighted because of skin color but because of it’s “meat.”

The Tribune employee continued by saying the woman’s narrative was likely chosen because it’s generally easier to cover crime with middle-class victims, who are generally more receptive to interview requests and more accessible by phone book, Facebook and database. The writer said she felt the responsibility to defend her profession, which was “being unfairly tarred.”

But journalist Afi-Odelia Scruggs attacked the Tribune employee’s letter, saying that the author “must have worked in heaven.” She wrote that newsrooms she’s worked in have shot down stories involving minority victims because editors reasoned their audiences wouldn’t care. She also refuted the claim that it’s easier to get in touch with middle-class victims than poor people, who can be found in databases for things such as traffic violations.

Though the photo characterizes the area of the woman’s shooting as primarily white, Nico Lang of WBEZ noted that the number of white inhabitants of the area is about the same as the number of black and latino individuals, about 26 and 24 percent respectively. However, the north side of the neighborhood is synonymous with the “white side,” Lang wrote, and it’s taking “baby steps” to becoming majority white.

Lang may be correct in at least one sense: Newspaper staffs themselves lack minority voices. October 2012 statistics show that more than 93 percent of front-page articles on the U.S. presidential election were written by white reporters. Moreover, in 2010 only about 13 percent of journalists represented minorities, according to Poynter. Newsroom layoffs frequently result in further depletion of those numbers, Associated Press Managing Editors reported.

Media outlets were questioned of racial biases when readers compared the coverage of the Casey Anthony trial to lack of news about a similar case of black children Aja Fogle, N’Kiah Fogle, Tatianna Jacks and Brittany Jacks, who were murdered by their mother in 2008.

Despite the opposing opinions on the subject, many note that such discussion is critical. “Conversations like these will continue to inform and improve our coverage,” a statement from RedEye said.