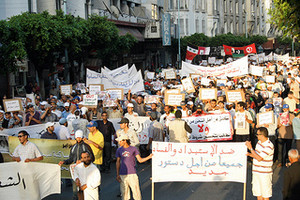 The report claimed that no journalists were jailed and no publications were censored or banned in 2012.

Morocco’s constitution guarantees freedom of expression, but prohibits criticism of the government and Islam. Morocco’s head of state, King Mohamed VI, yields considerbale power over the media, including the authority to appoint the heads of all public radio and television stations. Breaches are punishable by a prison sentence. In 2011, three journalists were targeted for reporting on corruption. However, physical attacks on journalists are less common.

Justice Minister Mustapha Ramid said Morocco is pushing for reconciliation between freedom of expression and respect for ethics. Last year marked the introduction of legal arrangements to protect the right of journalists to access and publish information. The report also mentioned the efforts to improve working conditions for journalists. According to the report, $7.6M was dedicated to subsidizing the print press in 2012. A total of 2,000 foreign papers are distributed in Morocco.

However Morocco’s strict penalities continue to contradict with current policy on press freedom. Moroccan editor Youssef Jajili is facing imprisonment after running a story alleging that a government official spent public money on a champagne dinner. Jajili claims he throughly investigated the situation and made several attempts to interview the official. If found guilty Jajili faces a possible one-year prison sentence.

Amnesty International said: “This is a stark reminder that despite their promised reforms and pledged commitment to upholding freedom of expression, the Moroccan authorities continue to stifle criticism.”

The 2013 World Press Freedom Index made by Reporters Without Borders ranked Morocco 136th out of 179 countries.

Reporters Without Borders regrets in its paper that the Moroccan government “is dragging its feet on the promised changes, especially decriminalization of media offences. Decisions on such matters as the granting and withdrawal of accreditation are often arbitrary and lacking in transparency.”