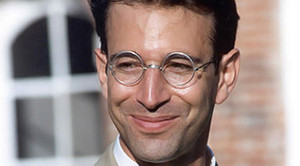 Georgetown University’s Pearl Project, a three-year investigation into the criminals responsible for Pearl’s murder, named Saeed as one of 27 men connected to the case. As of the project’s report release in January 2011, only four men had been charged.

But a violent streak this year seems to have stirred Pakistani officials to work: In the first six weeks of 2013, six media workers died and about 2,000 journalists have been assaulted or kidnapped in Pakistan. Along with Syria and Somalia, the country is now listed as one of the most dangerous for journalists.

Perhaps as a result, Pakistani paramilitary have been searching for Saeed for three weeks, an anonymous official told The Times, and last Thursday six Taliban militants were arrested in Karachi, Global Post reported.

In addition to Saeed being “in the picture” of Pearl’s murder, as a spokesman told Global Post, he was also involved in a parcel bomb attack on police officers in 2003 and a 2002 attempted suicide bombing of a hotel where US soldiers were staying. A chapter leader of Lashkar-e-Jhangvi, a Sunni militant group associated with the Taliban, Saeed’s been involved in terrorist activities for almost 20 years. His track record includes prison breakouts and an attempted abduction of former prime minister Nawaz Sharif’s family, according to NBC News. Hayee was arrested in 2003, associated with the killing of six Shiites, but he was later acquitted.

Pearl, 38, was working on an article about Islamist extremism when he was abducted in January 2002 and beheaded the next month. A video of his death was sent to the US consulate in Pakistan in an attempt to persuade US officials to release Pakistanis from a Guantanamo Bay detention center. The men who murdered Pearl also demanded to receive F-16 fighter jets that they ordered from the US and for American troops to leave the country.

Khalid Shaikh Mohammed, who admitted slitting Pearl’s throat and is responsible for coordinating the Sept. 11 terrorist attacks, is currently serving a life sentence alongside Ahmed Omar Sheikh, who kidnapped Pearl. The two were convicted in July 2002 along with seven others who were charged in absentia.

“We are gratified with this latest arrest and hope that justice will be served in a timely manner on all of those who were involved in the abduction and murder of our son, Danny,” Pearl’s parents, Judea and Ruth Pearl, said in a statement on Monday.