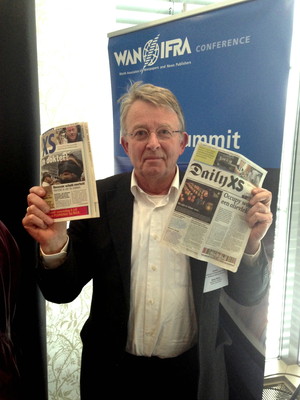 That’s the prediction from a Dutch designer and printer, who unveiled two new takes on really tiny newspapers at the World Printing Summit on Tuesday.

One prototype is a single broadsheet page, folded and refolded until it is A5 size. You open it, piece by piece, like an unfolding paper flower, to read all the content.

The other version is two broadsheet pages, folded down to A4 size.

Designer Koos Staal thinks these are logical designs – newspapers have been reducing size since the tabloid revolution began in 2003.

But a tabloid really isn’t that small. “If you wanted to read it all, it would take three hours,” he says.

The A5 folded newspaper can be read in a half hour. It has all the elements of a familiar newspaper – about 60 different editorial and advertising components, all on a single broadsheet size page.

–       careful selection of frequency and distribution;

–       reputation for being eco-friendly and socially responsible.

Is this the future of print?