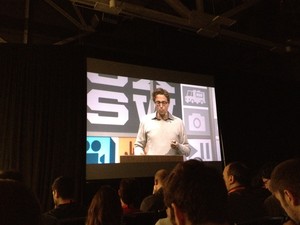 Founded in 2006, BuzzFeed now has more than 40 million unique visitors a month and has recently been “unintentionally profitable.“ Much of its success comes from its ability to create shareable content.

“I’ve spent a lot of time thinking about how ideas spread,” Peretti said. You could have a huge marketing budget, but if nobody wants to share your content and ideas then it’s not working.

BuzzFeed targets the “bored-at-work” network to share its content. There are “millions of bored office workers,” he said, who blog, instant message, and use Facebook and Twitter all day. This group is bigger than any traditional major news network, he added, and these are the people who make things go viral.

These have been joined by the “bored-in-line” crowd. “I used to hate mobile,” Peretti said, as it used to be impossible to share via mobile devices. But now, half of Facebook traffic comes from mobile, and 40 percent of BuzzFeed traffic, and mobile is becoming a key driver in what makes things go viral. “You can’t go viral if your content can’t be viewed and shared on the mobile web.”

There is a “science” behind BuzzFeed, Peretti explained, based on how likely someone is to want to share something, compared with how many people they would share it with. The team uses regression analysis and machine learning to predict social hits, Peretti said, and also human analysis to look at why things are succeeding.

It’s essential to understand how differently people behave on different parts of the web if you want your content to be shared, Peretti said. Google’s focus is on connecting you with information that you want, while Facebook’s is connecting people with their friends, and give them the means to express themselves. Consequently, Google and Facebook prompt completely different behavior, he said.

When people use Google, they assume nobody is looking, while on Facebook, they know everybody is looking. People will click on “nude pics of Scarlett Johansson,” but they won’t share the link, Peretti said: people don’t share what they are embarrassed about looking at.

Powerful sharing themes that have a tendency to go viral include humour, nostalgia, human rights, and we mustn’t forget the cute animals: they can bring people together, Peretti said. Novelty is also important in true break-out pieces, he added.

You can get rid of 80 percent of comments by allowing people to click on a button to express a specific emotion, Peretti said. On BuzzFeed, these “emotions”include LOL, cute, omg, win, fail, trashy and wtf. “Once they have reacted, they’re so much more likely to share,” he said. And sharing content is a vehicle to connect with people in your life.

BuzzFeed has come under considerable criticism for its cute animal lists and other lightweight content, as well as for its sourcing of these, and many have questioned how the site can expect readers to take its serious content seriously when it’s next to a list of “33 animals who are extremely disappointed in you.”

The more serious original reporting was introduced in December 2011 when BuzzFeed hired Ben Smith, a well known political journalist, as its editor-in-chief. The motivation behind doing this, Peretti said, was that social media itself was getting more serious. “Real reporting came to social media, Twitter became a news wire,” and BuzzFeed wanted to evolve with it, Peretti said. Two days after he joined, Smith got the scoop that McCain was to endorse Romney as the Republican presidential candidate.

Peretti said that he sees BuzzFeed’s publishing as like a Paris café. You can sit reading philosophy but maybe there’s a cute dog at the next table and you stop to play with it, and it makes you smile. This doesn’t make your philosophy reading any less relevant, and it doesn’t make you stupider.

It is this mix of “pure emotional shareable content with informational content” that makes BuzzFeed a true social media publisher, he said. When someone goes to Facebook or Twitter they will see the serious next to the light-hearted in their news feed. “People don’t like the arbitrary rules that separate content,” Peretti said.

Moving on to how BuzzFeed makes money, “100 percent of BuzzFeed’s revenue comes from social content marketing,” Peretti said. “I hate banners,” he explained, so BuzzFeed made the decision never to show banner ads.

“Content marketing” or sponsored content is also frequently described as “native advertising” as it mimics the content already on the site. It has attracted both criticism and praise from commentators who see it either as dangerous to journalism or a great new revenue source.

“I think social will open up the opportunity to make big great media companies and we want to be one of them,” Peretti said.

So far, it seems as if BuzzFeed is off to a good start. Is social the future for publishing? What does this mean for quality journalism?