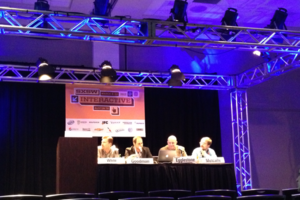 Interactive Newsprint is an initiative run by three UK universities that has built technology to turn sheets of paper into interactive displays. For a newspaper, this could mean that readers can press a touch point on the paper, indicated by an icon, to listen to a story read out, for example, or to vote in a poll, or to ‘like’ something on Facebook.

“We set ourselves a challenge to update print,” said Paul Egglestone, digital coordinator at UCLan’s School of Journalism, Media and Communication, and leader of the Interactive Newsprint project.

“One of the coolest things we’ve done is to connect paper to the Internet,” he added. This allows features such as interactive polls and connecting to Facebook.

Internet connectivity also offers the possibility for analytics. “These were born, online, but we can maybe bring this to print,” Metcalfe said. Interactive Newsprint could be used to track the number of clicks on an ad, how long somebody listens to it, and when and where they access it.

The Interactive Newsprint team aim to create community products out of their technology. UCLan had worked with a Lancashire community already to produce an online citizen journalism project. But the participants asked for a print product, they wanted something physical.

Print introduces an additional tactile sense to reading, said Metcalfe. And even Nick White, CEO and editor of The Daily Dot, and a dedicated fan of digital, admitted that there is still something valuable to print. Even tech startups, if are covered in the Wall Street Journal, suddenly want to buy the print product.

World news startup Worldcrunch, which translates articles from leading publications around the world into English, is digital-only but has partnered with Interactive Newsprint to create a prototype map which provides world news updates in the form of audio snippets, when users press on different regions. The map would have static design, but the audio content could be refreshed regularly.

The thinking behind the prototype was to create something that could be placed in a university library by vending machines, said Garrett Goodman, who does business development at Worldcrunch (disclosure: my husband!) Both he and White stressed the importance of providing content in such a way that consuming it fits into the audience’s existing routine.

Could print see an electronic revival? The technology is not yet ready for mass production, but the Interactive Newsprint team believe that it could get there within the next five years.