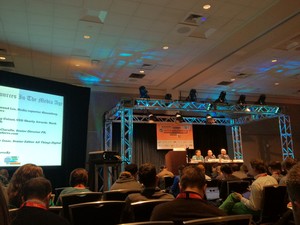 Twitter and other social networks offer journalists totally new ways to communicate, Galant said. “It’s really the first time in history that a journalist can write something without the approval of their editor.”

This is part of a more general shift in the way that journalists relate to and are perceived by the public, said Mike Isaac, senior editor at All Things D. “I now have my picture up there next to my byline,” he said, which allows the audience to connect the information he’s providing to a personality. It’s part of a move away from commoditized news, he added.

This is not the situation at an organization like Bloomberg, however: fellow panelist Edmund Lee, a Bloomberg media reporter, said that at his organization, the reporter “doesn’t exist.”

Regardless of how news organisations depict their reporters, journalists do exist on social media and the audience knows more not just about the writers, but also about “what shapes this person’s point of view,” said Galant. His company Sawhorse Media runs Muck Rack, a resource where journalists can create profiles and connect with sources in the PR industry.

This in the end benefits the audience because “journalists have never been objective,” said Lee. “Yes, journalists have always been about trying to get at what’s actually happening. But we pick and choose what parts we use, what to lead with.” And giving the public more information about how a journalist might be making these decisions can’t be a bad thing.

Moving on to the core topic of the discussion, all panelists were open to finding sources via social media. “I remember the first time I used LinkedIn seriously for a story,” said Lee. He sought out a source in Brussels on LinkedIn, messaged him, got his number, and “within an hour I was one of three journalists who spoke to him.”

“I don’t know if it was because I reached him through LinkedIn that he was more open to talk to me,” Lee continued. He has found sources are generally happy to talk via social media messages.

Another benefit  of communicating via social media is that people who might be leaking information don’t have to worry about a reporter’s email hitting their inbox, said Isaac.

There are limitations to how far social media can get you, however, panelists stressed. “Most of my best sources I’ve met in person, had lunch with, they know that they can trust me,” Isaac said.

“In a way, social media is kind of like Craigslist for sources – it can be a great place to start the transaction but you’re not going to finish it there,” said Galant. You will complete the contact via email, or via phone calls, he added.