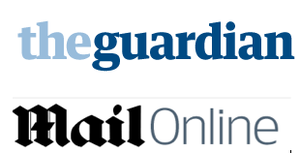 According to February ABC data, Mail Online led with 110.7 million unique visitors in February, which reflects a 21 percent increase from last year and signifies a 75 percent growth in visits for the year, a Daily Mail release says. The Guardian brought 43 percent fewer viewers than Daily Mail with 77.4 million for the month.

February usually brings a slump in online viewers, as was the trend for Mail Online, The Telegraph, The Sun, The Mirror, and London Evening Standard, The Guardian reported. However, The Guardian increased daily viewers for the month by 6.3 percent, compared to a 4.69 percent month-to-month drop for Mail Online. The Independent remained relatively consistent with a 0.18 percent increase, and Metro saw 4.52 percent more viewers.

Writing in the The Guardian, Jemima Kiss attributed the traffic increase to the paper’s coverage of Pope Benedict’s resignation, the Oscar Pistorius trial and the Russian meteorite landing.

“We are seeing record digital traffic across our online platforms and our journalism is being read by more people than ever before,” Guardian Chief Commercial Officer David Pemsel told Journalism.co.uk. He added that the data “reaffirms our position as Britain’s most successful quality newspaper brand.”