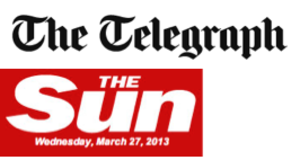 Current U.K. Telegraph subscribers will not be charged an additional amount for unlimited digital access.

The Telegraph said it decided to institute a paywall after seeing the success of its international paywall: nine out of 10 users that began a free trial ended up subscribing, a release said.

“We want to develop a closer rapport with our digital audience in the UK,” The Telegraph’s editor, Tony Gallagher, said, “and we intend to unveil a number of compelling digital products for our loyal subscribers in the months ahead.”

The Sun’s paywall is expected to launch around the same time as Premier League’s season begins this year, Media Week reported. The £20 million deal that allows The Sun to show clips from matches is expected to “kick off” the paywall, said Mike Darcey, chief executive of News International.

Darcey said free access to The Sun’s website, which reaches 10 times as many people as its print audience, no longer makes sense.

“This decision comes from a deep-seated belief that it is just untenable to have 2.4 million paying 40p for the Sun at the same time as a bunch of other people are getting it for free,” he said during a press conference this week.

“The Sun website is a fantastic website and sometimes it is a better product. I have to believe that we are all suffering, to a greater or lesser degree in the print world because of that, that part of those people are saying day in, day out ‘why am I paying for The Sun when I can get it for free’.”

Four years ago Rupert Murdoch said all his titles would eventually have paywalls, and The Times has had a fully-restrictive paywall since July 2010.

The new prioritization of the web prompted The Telegraph to cut 80 print-centric jobs in favor of 50 new digital jobs. Chief Executive Murdoch MacLennan told The Guardian that the company’s recent £8 million investment in digital products shows their commitment to transitioning into a digital-first news organization — apparently one with a paywall.

Viable, diverse, stable and safe – is this really too much for media to ask?