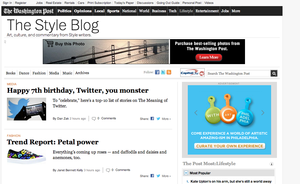 WaPo Executive Editor Marty Baron’s assurance to Poynter that “some posts can be as short as a sentence or as simple as a link” did not silence the Twittersphere’s response:  “At least WaPo is being open with its intention to kill someone,” Kissing Suzy Kolber blog editor Mike Tunison tweeted. Derek Thompson, senior editor of The Atlantic, wrote, “nobody has 12 smart things to say a day, it’s an absurd ask!”

But a look at other blogs shows that the request is not unreasonable. Many with blog-centric job descriptions churn out a dozen or more posts a day. Cory Doctorow posted to Boing Boing 10 times yesterday and 14 times each of the two previous days; Jack Dickey of Deadspin posted 13 times yesterday; Jim Romenesko blogged 10 times yesterday. Ed Kilgore of Washington Monthly’s Political Animal consistently posts 11 or 12 times each day — and these are often 500 word pieces. Kilgore wrote that people’s outraged responses to the WaPo job were laughable, as 12 posts is also the daily target for Political Animal.

Comparing WaPo’s Style blog with other newspapers’ blogs is somewhat difficult: Most other newspapers’ blogs are filled with reporters whose efforts are split to include print editions as well. Such is the case for Robert Mackey of The New York Times’ The Lede, but he still posts once or twice a day. Jacob Gershman of Wall Street Journal’s Law Blog is slightly more prolific with about four posts a day, and Paul Vigna sometimes posts to Journal’s Marketbeat over 10 times per day in addition to his general reporting.

So clearly WaPo’s request is not impossible. It’s not “like a parody of a blogger job ad,” as Journalism Professor Suzi Steffen wrote on Twitter, nor “nothing short of slave labor” as Journal Star Digital Editor Adam Gerik suggested. No, “this is, potentially, a great job,” as Dan Kois of Slate noted, and it certainly won’t be the last of its kind. The 24-hour news cycle has made us anxious for constant updates, and we’ve come to expect continuous posts from blogs. But how does such prolific posting affect content?

When WaPo blogger Elizabeth Flock voluntarily resigned in April after two sloppy posts earned her scoldings, former ombudsman Patrick Pexton blamed intense pressure for page views and posts—she averaged 5.9 posts per day in March 2012, and these posts were in-depth, 500-word pieces, Pexton noted. She inadequately attributed an article about life on Mars, which more or less copied and pasted paragraphs from a Discovery News story, and she wrote a story about Mitt Romney’s use of a Klu Klux Klan slogan, which turned out to be untrue. Flock told Pexton at the pace she felt compelled to work, a third mistake was inevitable.

And Flock wasn’t the only WaPo blogger to resign—Pexton said several others had preceded her exit, citing inadequate training, vague aggregation guidelines and no sign that their efforts would translate to promotions.

Katharine Zaleski, then WaPo’s executive director of digital news, responded to Pexton by saying that bloggers know “their first and central priority is accuracy, not speed, not buzziness.” But Flock told Pexton blogPost had to meet a quota of 1 million to 2 million visits per month — and some days she was the blog’s only writer.

This 12 posts a day quota translates into about one post every 45 minutes, which can only mean the blogs are shoddily reported, Kevin Drum of Mother Jones wrote.

“No matter how superhuman you are, there’s just no way to read widely, think carefully, do even minimal supplementary research, and then craft the necessary words in 45 minutes,” he wrote. “Not a dozen times a day, anyway.”

What’s preferable, he suggests, is taking the time to truly process information to comment on it intelligently. About an hour for a short political analysis piece is “the bare minimum,” lest errors creep in. “Enough’s enough,” he writes.

Perhaps a better solution is eliminating quotas altogether, as BuzzFeed has. Editorial Director Scott Lamb said in December that the site sets no daily target for posts, as he thinks doing so would encourage laziness. Instead, writers are driven to top the office’s leaderboard, which shows the most popular stories. “They are competitive people,” Lamb said, and this sense of competition, rather than quotas, has produced positive results.