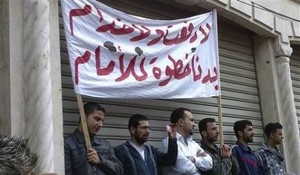 In Syria, where 28 journalists have been killed since the March 2011 uprising, the stakes are much higher in spreading the news. Rather than report on the state of traffic, as citizen journalists in other countries might, Syrians are tackling hard news topics including lawlessness, theft, kidnapping and lack of services, according to Al Jazeera English. Journalists complain about the new reality in rebel-controlled areas, even if it involves criticizing some of the armed groups.

“Kidnappings and theft are on the rise. We have one thousand Bashars [al-Assad, the Syrian president] now, and they are all powerful. There is no security,” said Syrian journalist Mohammed Sayed.

The majority of news reports from Syria consist of information put together by journalists outside the country and attributed to unnamed “activists.” Many journalists go under pseudonyms to prevent imprisonment, or even death.

It’s a courageous undertaking that journalists hope will shine a light on the current situation. “Even though we weren’t able to convince the world to intervene in the crisis through our reporting, the images that we show the world have at least brought some aid for the people and more importantly … prevented the regime from winning the media war,” said Ghaith Merjan, a Syrian journalist, who works for the UK-based Syrian Observatory for Human Rights, speaking to Al Jazeera.

In a CPJ report, Oliver Holmes, a Reuters reporter based in Lebanon, detailed the dangerous scene of citizen journalism in Syria. He reported from the city of Aleppo with Syrian citizen journalist Abu Zaid leading the way. A dead body in the street is a common sight, and Holmes commented on the numbness of citizens going about their daily lives. Journalists must show strength against the war.

“The regime prevented foreign journalists from coming in, and I needed to show the world that police were shooting dead peaceful protesters,” said Zaid.

Yet not all citizen journalists are on the battleground. From Leicester, England one citizen journalist has managed to become a leading figure in Syria’s civil war. Blogger Eliot Higgins has become a leading source on Syria’s weapons. According to The Guardian, Higgins is able to identify different forms of rockets and bombs, which in turn have led to breaking news stories.

Higgins, along with Syrian citizen journalists, make a shocking and complex situation a little clearer. The Associated Press reported that March was the bloodiest month yet in Syria’s 2-year-old conflict, with more than 6,000 documented deaths according to Rami Abdul-Rahman, a leading anti-regime activist.