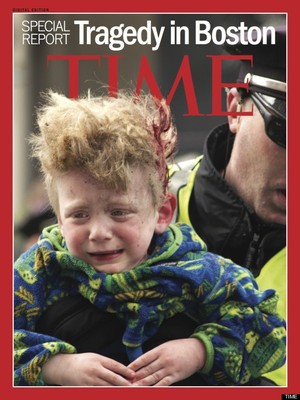 The Daily News declined to comment on its editorial decision, but the question of whether to publish graphic images is one many other editors confront.

Some advocate for the publication of graphic photos, arguing that text can never show the true magnitude of a horror as visuals do.

“I think TV news distances and ‘shrink-wraps’ human suffering,” writes Zeynep Tufekci, a fellow at Princeton University’s Center for Information Technology Policy. “[A]nd I believe such mode of reporting is against the public interest.”

BuzzFeed and The Atlantic, which both ran a particularly disturbing photo (number 8 here) of Jeff Bauman Jr., who lost both of his legs in the bombings, defended their decisions.

“We agree that this image is difficult to look at but believe that it is also a true depiction of the terrible nature of this story,” Atlantic spokesperson Natalie Raabe told The New York Observer. “We were careful to prepare viewers for the graphic content, including a warning that entirely obscures the photo.”

BuzzFeed Editor Ben Smith said the graphic photos were essential to convey the horror of the bombings.

“It was a judgment call based on what we were trying to portray,” Smith told The Observer.

The graphic nature of the Bauman photo “clearly” put it out of the question for publication in The New York Times, managing editor of standards Phil Corbett told The Observer.

“It’s so graphic,” said James Estrin, a senior NYT photographer. “I’m not sure the graphicness advances the story.”

The Times’ decision, conflicting BuzzFeed’s and The Atlantic’s, shows the complex web of factors editors weigh when running a graphic photo. Timeliness is essential, Poynter’s Al Tompkins suggested, adding that gory images should only be used when the news is breaking. Kenneth Irby, former Newsday photo editor, said news organizations must consider the added news value a photo provides.

But author Jim Lewis wrote that news value is irrelevant, as “shock overwhelms information every time.” He added that there’s a danger of such photography becoming “horror-porn.”

“A picture can do many things that a paragraph can’t,” he wrote in 2004, “but enlightening us about the horrors of war isn’t one of them.”

Another issue of publishing raw, gory images is the subjects’ privacy. One commenter on an article in The Observer criticized the publication of the photo of Jeff Baumer.

“Does Jeff really need the entire world to see the bones sticking out of his knees?” he writes. “He is twice victimized, once by the blast and a second time by the camera. Why don’t you put down the camera and help, associated press [stet]?”

Similarly, after photos of the 2010 earthquake in Haiti were published, some Haitians felt victimized — Valérie Payen-Jean Baptiste, a Haitian elementary school teacher, referred to the graphic photos’ publication as a “cruelty.” She added that some saw the photos as “an insult, a disaster, since we have already suffered so much,” she told the American Journalism Review.

While the Boston bombing photos are shocking in their own right, their stark contrast to the lack of comparable images from Iraq and Afghanistan gives them added weight, noted Michael Shaw, publisher of BagNewsNotes.

“I’m having trouble reconciling the bloody images from Boston yesterday when they very well might exceed in a day the number of media images of U.S. deaths and even casualties in the Iraq and Afghanistan battlefield over more than a decade,” Shaw wrote for The Huffington Post Wednesday.

As Al Jazeera‘s Ted Rall pointed out, images of the war have been “studiously sanitised,” resulting in a de facto censorship of the American press. While the bodies of dead soldiers were certainly off limits — in June 2008 Zoriah Miller was controversially forbidden to photograph the Marine Corps after uploading photos of a suicide bombing’s aftermath — even the flag-draped caskets of dead American soldiers are shielded from press cameras as a matter of official policy. The New York Times noted in 2008 that, “after five years and more than 4,000 American combat deaths,” an exhaustive search led to only a half-dozen photos of dead American soldiers.

But the front-page real estate given to the Boston bombing gore could set a precedent that changes the current media culture. While we can expect to see fewer graphic images in the continued coverage of the Boston bombings, as the worst news has already broken, what remains unknown is whether this event will encourage further publication of such images in the future.