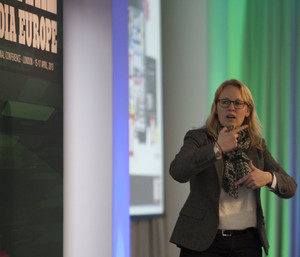 “The challenge is to find out what the user really values your product for,” said Donata Hopfen, managing director of Bild Digital. Bild is planning to launch a premium online content offering this year, said Hopfen. It will be a ‘freemium’ offer, and Bild’s unique offering, the sort of news that only Bild can do, will be now be charged for, she specified.

“We were thinking very digital-first before, now we are thinking consumer-first,” said Frédérique Lancien, Digital and New Business Director at Groupe L’Equipe . “You need to think what consumers want before you build your offer,” she recommended.

At L’Équipe, the team looked at what sort of thing its customers already paid for, and tried to work out how to match these with what the paper could offer, combining its strong journalism with its massive archives. One product it came up with was e-books that offered a mass of content on an individual sportsperson, betting on the fact that sports fans want to know everything related to the sports that they love.

Paul Smurl, vice president of NYTimes.com paid products, also stressed the importance of finding out what your readers want. The paper conducted dozens of focus groups, he said, before launching metered paid online content, on topics such as what the pop-up pay prompt should look like.

Brooke Christofferson, vice president of market and business development at Republic Media, which is owned by Gannett and which owns The Arizona Republic, said that to make a paid digital offer work, it’s essential to invest in quality, unique content, and identify what readers are most concerned about. See video interview with Brooke here.

Panellists also discussed the advantages of a freemium versus a metered model. A metered model only targets frequent users, Thomas Schultz-Homberg, head of electronic media at Frankfurter Allgemeine Zeitung, pointed out, while a freemium model targets all. There is therefore more potential for selling subscriptions with a freemium model, but it’s more work.

The New York Times’ metre was inspired by the Financial Times’ model, Smurl said. “If you’re deciding for users it can be confusing,” he explained: “we let them decide what content they want to use towards their free allotment.” However, The New York Times is planning to introduce new paid products as well as its metre. “We are thinking about a freemium approach,” Smurl said.

Gannett now has paid online content at 78 of its papers. Each has a different meter based on research in that market, Christofferson explained.

As a newspaper without a large subscriber base in print, launching a digital subscription service means that Bild will be in a position to learn more about its customers and what they like than it has over the past 60 years. “This really changes the nature of how we do business at Bild,” Hopfen said. “It’s changing the entire organization.”

Analytics will steer the fine-tuning of Bild’s freemium model, Hopfen expects. Once you have a premium model you have to study the articles that have the highest conversion rates, for example.

Schultz-Homberg spoke about his work at Sächsische Zeitung, which was the first paper in Germany to introduce paid online content. SZ also has a freemium model, with the unique local content only available to subscribers.

An important lesson that SZ learnt was involving editors in the process of sorting content, Schultz-Homberg said. At first, the paper used an automated system to decide what was free and what was paid, he explained, but the problems with this became all too evident when there was a flood in the region and all coverage of this was put behind the paywall.

Introducing a paid online content initiative is a delicate business, panelists stressed. “We under-estimated the volume of calls from customers,” said Smurl. The paper was getting about 12,000 a day when the metered model was launched, many from existing print subscribers who wanted to know how to activate their accounts.

The Arizona Republic put up the price of its print subscription when it added the digital element, and this led to a somewhat “brutal” attack on its staff online, said Christofferson. Staff were engaging on social media with the goal of increasing transparency, but eventually realized that rather than helping, they were fuelling the conversation.