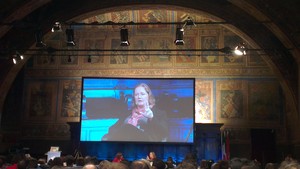 Old institutions are trying to adapt but they find changing processes a much higher barrier than lack of resources, the report found. Obstacles such as how a content management system worked could be more serious than a lack of money, Bell specified.

A power shift is taking place from the brand to the individual, she said. “I think the shift to individualism in journalism is very important,” she added, citing Andrew Sullivan as an example of someone who is betting on this shift (although adding later that she thinks his chances of success are no more than 50:50).

This doesn’t mean that institutions aren’t needed, however: you need strength, longevity and continuity to hold the powerful to account, and this must be provided by institutions. But, the institutions must realize the value of their people, and maybe act more like an agency or a studio system, where they have a looser relationship with a network of individuals, she suggested.

Nate Silver, the statistician wizard whose FiveThirtyEight blog is now part of The New York Times, doesn’t have the relationship of a conventional employee with the paper, Bell noted. He has more independence, and clearly has his own brand.

Many people in journalism are thinking about how best to reorganize their newsrooms, Bell said, but they never start the change by thinking “what are we going to allow the journalists to do?” It doesn’t make sense to organize around a process, when your real value resides in your people, she said.

Integrated newsrooms might not be the best solution going forward, Bell said, citing a speech by Clark Gilbert, president and CEO of Deseret News Publishing, that he gave last week. He believes that integrated newsrooms will not survive, as tying two such different processes together such as print and digital will hold you back.

“I think the integrated newsroom is a bet on a future that we thought might be sustainable in 2005-6 but now we realize is not,” said Bell. “The empirical evidence so far is that integration doesn’t allow for the right degree of purely digital thinking and speed to keep up with where the market is going.”