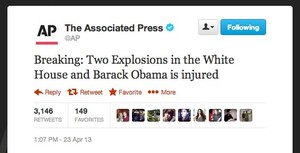 Around 1 p.m. EST yesterday, panic spread after the Associated Press (AP) Twitter account announced that US President Barack Obama had been wounded from a series of explosions at the White House. Minutes later, the AP revealed that their account had been hacked.

With 1.9 million followers, the concession of retweets spread like wildfire, reaching the stock market where the Dow lost 130 points within a few minutes before returning to it original level.

The fake tweet read: “Breaking: Two Explosions in the White House and Barack Obama is injured.”

The AP quickly announced that their account had been hacked and was suspended yesterday. Following the incident, an FBI investigation is under way. An AP staffer said on his Twitter account that the attack came shortly after a number of AP employees had received a phishing email.

Hacking can have strong implications for a venerable publication like the AP.

“A media publisher conceivably could be sued for negligence if things are published under their name that is not true and if they didn’t take reasonable steps to prevent the erroneous publication of information,” said Nick Economidis to Bloomberg.

The hack is linked to The Syrian Electronic Army (SEA), which has already hacked several international media accounts, including the Agence France-Presse (AFP), Sky News Arabia, and Al Jazeera Mobile. SEA, which claims to support the Syrian regime of Bashar al-Assad, had published several photos and documents on the account before it was suspended.

Just last Saturday, the Twitter accounts of two flagship programs of the American television channel CBS also fell prey to pirates. Twitter did not comment on the incident, but it is evident that security measures need to be improved.

“…Journalists – all of us, really – need to understand much, much more about security. Whatever precisely happened at the AP in this case, any news organization should have had systems and policies in place to prevent it, period. (Twitter’s own security methods regarding user accounts are not up to industry best practice, but they’re getting better.)” wrote Gillmor.

Gillmor encourages a “slow news” approach to prevent the spreading of false news.

To improve Twitter’s security, a “two-factor authentication” is being proposed, which would require those wishing to sign into the account from a new device enter a secondary password.

Mashable’s Lance Ulanoff said in an op-ed, “If Twitter had already been requiring two-factor authentication for these trusted accounts, I can’t imagine that we’d be seeing as many hackings.

Another proposed security measure is the ability to post corrections that can be attached to a tweet after it has been sent out.