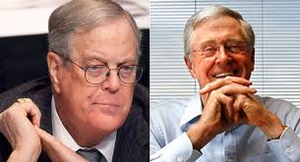 Koch Industries is reported to be exploring a bid to buy the Tribune Company’s eight regional newspapers, including The Los Angeles Times, The Chicago Tribune, The Baltimore Sun, The Orlando Sentinel and The Hartford Courant. There is also a possibility of buying Hoy, the second-largest Spanish-language daily newspaper in the United States.

The Tribune Company emerged from bankruptcy on 31 Dec. and its newspapers are valued at roughly $623 million. The interest in newspapers is part of a three-pronged plan to persuade Americans that a small government is best, according to The New York Times.

Charles and David Koch both run Koch Industries, one of the largest privately owned companies in the U.S. The energy and manufacturing conglomerate based in Wichita, Kansas, has an annual revenue of about $115 billion. The brothers, known as being politically libertarian, have advocated for decreasing the size of the government and loosening restrictions on taxes and regulation.

The buy would be their first foray into media. If they become publishers, there is a possibility that the papers would reflect their views. Concerns over US newspaper owners pushing their own agendas have grown in recent years, as the Times reported last summer:

“There is a growing worry that the falling value and failing business models of many American newspapers could lead to a situation where moneyed interests buy papers and use them to prosecute a political and commercial agenda.”

With the LA Times being the biggest seller, backlash has emerged at the thought of the conservative brothers taking helm of a liberal paper. A petition created by progressive website Daily Kos and the L.A.-based Courage Campaign organization was signed last month by thousands to stop the buyout.

When LA Weekly first announced the Kochs’ interest last month, reports heated up over a possible bidding war with another interested buyer, Rupert Murdoch. He is reportedly very interested in acquiring the LA Times, which would add to his empire of 175+ newspapers.

Leading the group of interested buyers are billionaire Eli Broad and Ronald W. Burkle, both Los Angles residents and prominent Democratic donors. The Tribune Company reportedly is looking to sell all eight papers and their operations as a bundle, yet it could decide to hold onto the papers if they don’t like an offer.