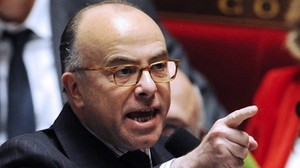 Budget minister, Bernard Cazeneuve (pictured left) launched the injunction on Tuesday 9 April in front of the French National Assembly, calling for members of the press in possession of Offshore Leaks files to pass them on to the Ministry of Justice “so that they are able to do their job.” Le Monde’s major issue with this demand lies in what Cazeneuve actually means by “the press.” Indeed, they are the only French newspaper to have had access to the mass of 2.5 million Offshore Leaks documents gathered by the ICIJ. In an article published yesterday, 10 April, the French paper wondered whether its planned refusal to cooperate with this demand would lead to “the press” being considered a hindrance to the justice system in preventing them from following up these investigations into offshore dealings.

One issue that demands consideration is the secrecy of journalists’ sources, a principle which is currently protected by French law. Le Monde points out that handing over the Offshore Leaks documents to the judiciary will inevitably expose the process behind gathering and developing the data in question, and could ultimately lead to the identification of the ICIJ’s classified sources.

The article then isolates the following rule governing the journalistic profession, arguing that it cannot simply be ignored: a journalist should under no circumstances confuse his/her role with that of a police officer or upholder of the law. In investigating the workings of offshore dealings, Le Monde argues that it is neither engaged in a business of informing and denouncing, nor working as an assistant to fiscal inspectors or any other authorities, including the judiciary and the police.

Le Monde believes that it should stick to its journalistic role. “It is up to the justice system to establish responsibilities at a time when the law might have been broken. It is up to members of the governments and legislators to take measures to warn people of breaches of the law. It is up to the press to enlighten the reader…”

In the interests of protecting their information sources, Le Monde (along with other media publications working on Offshore Leaks exposures) hereby announced its firm rejection of all demands, “be they judiciary or governmental,” for the handing over of information. Their rationale? To do the opposite would be “detrimental to their freedom to practise their profession in a democratic fashion.”