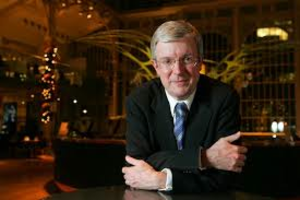 In an email to BBC staff, Hall outlined key challenges and said he hopes to “win back trust” for the corporation.

“In the coming weeks, I will set out how we can all shape the next chapter for the BBC as we move towards our centenary in 2022,” said Hall.

His appointment as director-general is not the first time Hall has worked for the BBC. He was the head of news and current affairs from 1996 to 2001, and oversaw the launch of Radio 5 live, BBC News 24, the BBC News website and BBC Parliament.

Hall comes in at a crucial time for the BBC. Former Director George Entwistle held the position for only 54 days, resigning after the Jimmy Savile and Lord McAlpine child abuse scandals. One of Hall’s first tasks will be to appoint a new director of news and a director of television.

The BBC reports that “the news role is particularly important following the handling of the two Newsnight crises – one over the failure to broadcast the original investigation into allegations against Jimmy Savile and the subsequent programme that led Lord McAlpine to be wrongly implicated in claims of child abuse.”

Experts and former BBC employees weighed in on the issues facing the BBC, such as former editor of Newsnight Sian Kevill, who said that, “The appointment to the news job will be crucial. They need to help news find its confidence again and find its appetite for doing difficult investigations.

Aside from improving how the BBC covers news and current affairs, Hall is also faced with complaints stemming from job cuts, which have the National Union of Journalists (NUJ) up in arms.

NUJ, a trade union for journalists in the UK, along with broadcasting union Bectu, led a strike last Thursday to protest the BBC’s Delivering Quality First (DQF) initiative, a program which would cut thousands of jobs, namely in the journalism field. The action severely disrupted the BBC’s schedules and had a knock-on effect on Easter programming.

NUJ claims that plans to cut 2,000 jobs over five years have led to “compulsory redundancies, unacceptable workloads and stress, and increased cases of bullying and harassment”.

“The morale of [Hall’s] staff is at an all-time low because of the cuts, excessive workloads and the BBC management’s failure, in some parts of the corporation, to redeploy staff.”

Stanistreet and other union members are calling for a six-month moratorium on the job-cutting initiative.

Tony Hall may not be coming in at an easy time for the corporation, but many are hopeful that he can increase the BBC’s credibility. Former BBC chairman Michael Grade said Hall is “the right man to restore confidence and trust.”

Hall is being described as both an insider and outsider, something broadcaster and media consultant Steve Hewlett believes will benefit him in the long run.

“He knows the organisation. He’s no fool. He’ll get the right people around him. If anyone can do this, he’s the top of the list. I’ve some confidence it will go well.”