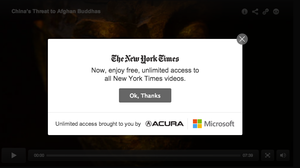 “We have to change the perception of the New York Times as not only a place to read about important stories of the day and interesting topics, but also a place to watch,” Denise Warren, executive vice president of NYT’s Digital Products and Services Group, told Journalism.co.uk.

Many of the Times’ videos were already available for free on YouTube and Hulu, an inconsistency that needed to be addressed, Warren told paidContent. And thanks to sponsorship by Acura and Microsoft, videos are now freely accessible on all of the Times’ platforms, including its mobile apps, according to a release.

This move follows announcements that the newspaper is considering a cheaper digital subscription plan to supplement its current 668,000 subscribers. As paidContent noted, these shifts toward accessibility lie in stark contrast to the company’s commitment to a paywall, with the newspaper even patching up holes in its wall earlier this year.

But with video ads generating a much higher profit margin than other digital ads, the allure of more clicks perhaps superseded the Times’ paywall strategy. The Times isn’t the first newspaper to reap benefits from both a paywall and increased video traffic: Toronto’s Globe and Mail also excludes videos from its metered paywall.

Warren told paidContent that the presidential election brought a spurt in video traffic, which has since remained elevated. NYT’s video views doubled during the past year, Journalism.co.uk reported.

“I think video has become an expectation among web users,” Warren said. “It’s something our users have been demanding, so this is our response.”

“We have a lot of tools at our disposal to tell stories,” Warren said in an interview with Nieman Lab. “We need to be aggressive about using all of them, and video is one of those important tools.”

Many other newspapers are also scrambling to meet the demand for video ads, as Justin Ellis of Nieman Lab pointed out. WSJ Live, HuffPost Live and the Washington Post’s forthcoming video channel were all created to increase video content and thus ad revenues.

The Times currently puts out more than 250 videos per month, Journalism.co.uk reported, but Warren says that number is on the rise. The newspaper plans to amp up its video offerings, possibly by creating branded video channels around key journalist personalities, paidContent reported.

But with a newsroom full of mostly text-based journalists without the schooling or charisma for video, as Jeff John Roberts noted, the Times’ increase in video productivity likely won’t be easy, even with its major investments.