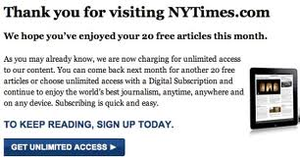 Within a few weeks, four papers have announced paid digital content strategies: the Washington Post, the San Francisco Chronicle, the Telegraph and the Sun. With online ad revenue not catching up, it comes as little surprise that the majority of papers in developed markets might well charge online readers in the future.

USA Today remains one of the last major US newspapers without a paywall. During a Business Insider conference in December, Publisher Larry Kramer said the paper is not “unique” enough to start charging for content. “There is so much national news out there,” he said. “I think we would lose more than we would gain.”

Another reason for holding off could be because its parent company, Gannett, gets subscription revenue from its 80 local newspapers. The IB Times also notes that USA Today is distributed in hotels and airports across the country.

UK tabloid The Daily Mail however is experiencing something entirely different. PaidContent.org’s Matthew Ingram pinpoints the paper’s success, saying their “approach is to give the web what it wants — interesting stories, many of them about celebrities or odd events, and plenty of variety: the paper says it updates the home page every 30 minutes at least, which it believes is part of the reason it gets over 100 million unique visitors a month.”

The Mail’s firm anti-paywall stance comes after the announcements from The Telegraph and The Sun launching paywalls.

The London Evening Standard’s Roy Greenslade commented on the Telegraph’s decision to add a paywall on Wednesday, calling it a “watershed” move because British national newspapers are “partisan.”

“Reader loyalty depends to a large extent on the fact that people like the “spin”, for want of a better description, in their favoured title. They follow the columnists. They get comfortable with the accompanying material.”

What does this all mean in the end? In an op-ed Reuters’ Felix Salmon said papers will start asking for “paywall advice” from consultants.

“At some point, the industry is going to informally settle on a single management-consultancy company to ask for paywall advice from…No one site can easily do A/B testing on its own. But put them all together in the head of a well-connected management consultant, and it becomes much easier to see what’s working and what isn’t.”

Meanwhile, as Laura Hazard Owen of PaidContent.org said to the International Business Times, “That doesn’t mean [paywalled] newspapers are going to prosper in every case… but in my opinion failure is likely to happen in spite of the paywall than because of it.”

The New York Times launched its paywall two years ago. Journalism.co.uk interviewed Paul Smurl, general manager for core digital productions at the NYT, about the lessons from the paid digital content strategy over the past two years.

Smurl said that since 2011, over 300 US publishers have followed suit and put up paywalls.

“So there’s still some risk but I think it’s less risk than what we faced,” he said. “We sat on the precipice thinking the economics of this model could be a push, meaning we didn’t know if it would be immediately profitable. It’s wildly exceeded our expectations on that front.”