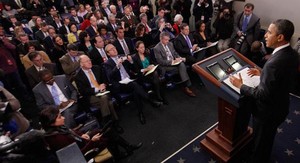 Reider is among a string of editors and correspondents who have complained about the distance between the press and the Obama Administration. Since 2008, Obama has held only 107 Q&As with journalists, compared to George W. Bush’s 354.

One reason for this distance could be what Reider calls the “age of Twitter.” The White House is technologically savvy; with a following of 29 million on Twitter and an even larger following on Facebook, Reider says “the administration can get its message out on its own terms, bypassing the middlemen and women.”

He echoes the sentiments of Politico, who reported that the Obama White House is “extensively using government creation of content (photos of the president, videos of White House officials, blog posts written by Obama aides), which can then be instantly released to the masses through social media. They often include footage unavailable to the press.”

Newspapers and reporters are being left out of the equation, even such established publications like The New York Times and The Washington Post.

Reider reports that Obama “has turned to regional reporters and TV celebrities who are less likely to challenge him.” Obama’s go-to interviewer is Steve Kroft of “60 Minutes” who in January conducted an interview with Obama and Hilary Clinton. The interview was heavily criticized as being “soft.” This is the complaint of many of Obama’s interviews. He is effectively bypassing reporters who ask the tough questions.

The Washington Post reported that newspapers have been shut out by the administration. “It used to be taken as a matter of course that the major newspapers would get an annual interview,” said Jackie Calmes, a White House reporter for The New York Times. “Now I take it for granted that it’s not going to happen.”

In February, the battle heated up when the administration refused to allow press to cover a golf game. Many editors expressed outrage including ABC’s Ann Compton, a White House reporter for more than 40 years. She said Obama’s accessibility to the press was a “disgrace.” In a Politico article titled “Obama, the puppet master” Compton said the Obama administration goes to “extreme lengths to keep the press away.”