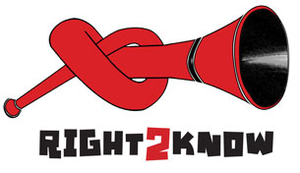 Labelled the “Secrecy Act” by its critics, the controversial Bill seeks to “provide for the protection of certain state information from alteration, loss, destruction or unlawful disclosure” – in other words, it poses an ugly threat to the investigations of whistle blowers and their fundamental right to access and disseminate information of public interest.

Right2Know campaigners, who before the vote, warned on their website that, “if passed the Bill would add to the generalised trend towards secrecy, fear and intimidation that is growing in South Africa today,” held a silent vigil in parliament in Cape Town, alongside a picket outside the ANC headquarters in Johannesburg, but to no avail.

The Bill was passed 189 votes to 74 with one abtension, meaning that the matter now lies in the hands of President Jacob Zuma, who has the option to get it passed into law. Significant improvements have already been made to the Bill after consultation by the National Council of Provinces, but according to Lindiwe Mazibuko, parliamentary leader of the Democratic Alliance party, the Bill nevertheless remains “flawed” and “does not pass constitutional muster.”

Many believe that the Bill could still be manipulated as a tool of secrecy, eliminating any hopes for openness and transparency and thus discouraging whistle blowers from carrying out their investigations and reporting on their findings.

In a speech to Parliament just before the passing of the Bill, Mazibuko announced that “if the majority party passes this Bill today, we will petition the Honourable President to send the Bill back to the National Assembly under Section 79 of the constitution.” She spoke out against the dangers of the Bill to freedom of speech in South Africa, warning that “the media cannot function when important information is suppressed. Bad governments thrive under the cloak of darkness. Those who have nothing to hide have nothing to fear.”

So what exactly are the improvements that have been made to the Bill and why were they deemed insufficient? According to Human Rights Watch, “the current version, while improved, remains unclear on the key question of whether whistle blowers and journalists seeking to expose certain sensitive issues, such as corruption, would be protected under the law.”

One significant amendment “[states] that prosecutions under the law must respect the fundamental rights of freedom of expression and the right to access information.” Another positive change tightens up the grounds for prosecution by specifying that “there must be unlawful intent to disclose information.”

However, an amendment that doesn’t really seem to improve the Bill significantly is one stating that an individual will not be violating the act if they disclose information that exposes criminal activity. As Human Rights Watch points out, this amendment is inadequate since “it is unclear whether [it] would apply to someone who exposes conduct that might not be considered criminal in an effort to promote transparency and accountability.” The example they list is revealing how the government spends taxpayers’ money – something which does not constitute a crime, but which is still useful information that the public has a right to access in a democratic society that claims to be open and transparent.

Even after the amendments, then, there remains the frightening possibility that a whistle blower, journalist or activist who discloses classified information that is not considered to be serving the exposure of criminal activity, or is seen to be carried out with “unlawful intent,” could be convicted of “espionage” and face “draconian sentences” of up to 25 years. As campaigners such as Right2Know are arguing, this move would constitute a serious mark of regression for South Africa, dragging the nation back into its dark past of pre-democracy corruption and restriction of information.

It remains to be seen whether the Bill will make it to the Constitutional Court for further review, but if Mazibuko has anything to do with it, the act will not pass into law in its current state. She assured the rest of Parliament during her speech that “this fight is not over.”