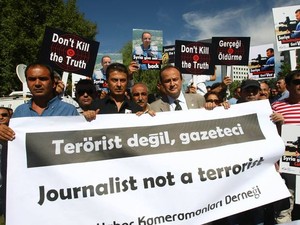 Offering a groundbreaking platform for journalists silenced by the repressive regimes of their home countries, Lebedev’s project will not only carry out insightful case studies into the hardships encountered by individuals throughout their journalistic careers, but will also provide an arena for these journalists’ own work, promising to enrich the UK public’s awareness of the political situation in these countries by giving them access to the investigative journalism of true insiders. In an article published online yesterday, Lebedev, owner of the Independent and Evening Standard newspaper, explained his personal motivations behind the project – namely, the murder of Anna Politkovskaya, a journalist who was working for his family’s Russian newspaper, Novaya Gazeta, when she was assassinated as a result of her work on exposing Russian atrocities in Chechnya.

Adviser to Lebedev and curator of this new project, Jim Armitage told us today during a phone conversation that they have not followed the general rule of “only launch a campaign when you know you can win.” He clarified that theirs is not a “binary victory-or-defeat type of project” – the team behind ‘Voices in Danger’ merely hope that they can contribute in one way or another to raising awareness of corruption in countries where journalists are threatened, harassed, forced into hiding, and sometimes even killed, as was the case with Politkovskaya and countless Syrian reporters and citizen journalists killed during the past few years. He explained that if an oppressive regime in a country such as Chad or Somalia has a major national media organisation like the Independent highlighting cases of its abuse, this has a wide impact, but not necessarily one that is easily measurable or quantifiable.

Armitage talked about some of the campaigns run by the Independent’s sibling newspaper, the Evening Standard (also owned by Lebedev), in order to illustrate the benefit of using a newspaper as an instrument for exposing social injustice. He listed ‘Dispossessed‘, which raises and donates money to charities helping impoverished people in London, ‘Ladder for London‘, which helps young unemployed adults to find work, and ‘Get London Reading‘, which signs up volunteers to offer weekly reading sessions for children in the capital. He also mentioned the Independent’s campaign to help child soldiers in the Central African Republic to demonstrate the positive impact of using “high audience numbers” and “encouraging readers to share stories” in spreading awareness on silenced issues.

Armitage says he believes social media will be at the very core of ‘Voices in Danger’s potential success: “we want these stories to be read and shared, tweeted, and blogged” he said. The more readers disseminate the stories via social networks, the greater the level of awareness and pressure that is brought to bear on governments, hereby making these journalists’ stories unignorable. “We’re trying to get governments to respond,” he said, something which he admits has not yet happened. That is precisely why the role of social media is so crucial in spreading such awareness.

In terms of other levels of reader engagement, Armitage cited the project’s first case study, one illuminating the story of Sri Lankan journalist and political cartoonist, Prageeth Eknaligoda, who disappeared in 2010. The story included a message from Amnesty International encouraging readers to write to the president of Sri Lanka in order to put pressure on him to respond to queries regarding his disappearance. However, Armitage pointed out that sometimes this level of engagement is discouraged by certain NGO’s.

A number of NGO’s will be involved in ‘Voices in Danger’ to assist in providing contacts and advice for Armitage and his researches, the main being Reporters Without Borders, Committee to Protect Journalists, and Amnesty International. According to Armitage, the main priority of the project is “to tell these people’s stories through their own voices.” Unfortunately, issues of security often intervene, and it is often necessary to protect the identity of certain journalists using aliases. For example, Armitage revealed that an Iraqi journalist had recently shared a compelling story with him, but ‘Voices in Danger’ will be prevented from using his real name for fear of the backlash in Iraq. If the journalists themselves cannot speak freely, the alternative is to speak to their family, colleagues and lawyers. Armitage talked about how the second-hand sources can often prove as interesting to talk to as the journalists themselves. He cited a case study that is currently in the pipe line concerning a journalist in Chad who was imprisoned without trial and denied legal representation until an NGO discovered his situation. Armitage managed to speak to the lawyer that picked up this journalist’s case on a pro bono basis because he was outraged by its gross mismanagement. The lawyer provided a unique insight into the horrific conditions of the prison in question which had been responsible for inmates dying in the past.

Armitage is “excited” about future case studies, which will be carried out by himself and “a couple of researchers” and published on a new section of the Independent’s website. Upcoming studies to watch for include the story of the journalist imprisoned without trial in Chad, and another involving a female journalist determined to expose sexual violence against women in Honduras. As a journalist himself, he is finding the project is deeply “inspiring”. The most powerful message to be taken away from it, in his opinion, is the determination of journalists to stay in their profession even after harassment and imprisonment. “This rarely gets recognised. Journalists don’t usually like to be the story. We’re not here to boast about the risks we take. We’re not looking to self-aggrandise.” But these individuals’ personal stories deserve to be shared, and what’s more they need to be shared in order for the mismanagement and corruption of certain governments to be brought to light.

The Independent is undertaking a noble venture with its ‘Voices in Danger’ project – it is taking advantage of its privileged status as an “independent” newspaper to act as a mouthpiece for journalists deprived of such independence in their home countries.