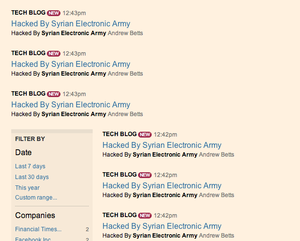 The FT’s Tech Blog was hacked and 12 messages “Hacked by the Syrian Electronic Army” were posted. Official Twitter feeds were also hijacked.

This follows a series of attacks against major news organizations by the anonymous hackers who go by the name of the Syrian Electronic Army. As the FT reported, the SEA claims to support the regime, although it denies any formal link to the authorities.

In March several BBC Twitter accounts, including the weather feed, were breached, the BBC announced.

In late April the target was the Associated Press. Its Twitter account was hacked and a fake tweet was posted about explosions at the White House in which President Obama was injured. The tweet affected the stock market where the Dow Jones initially lost some points, while recovering shortly after.

The Financial Times said its hacking followed a phishing attack on the company’s email accounts. Other attacked were also initiated by fraudulent emails.

The Guardian previously reported how SEA attacks “have been carried out via “phishing” emails which lure recipients into thinking that they are at the login site for their email, so that the hackers can capture email addresses and passwords.”

Cherilyn Ireton, Executive Director of the World Editors Forum, was at the FT headquarters during this recent hacking crisis. “They anticipated the possibility and had crisis plans in place”, she tweeted during the day.

“They knew how to respond once they realised they had been hacked”, she told Editors Weblog. “This showed the importance of having a crisis plan where everyone knows what’s in it and how to react. It is not the time to be running around wondering what to do.”

The hacking episodes highlight some of the challenges of using social media as an accurate reporting tool. When it comes to real-time reporting during catastrophes or breaking-news events like the recent Boston bombings, news organizations are recognizing that being right is more important than being first, if they are to maintain their credibility.

The risk of hacking can further undermine news organizations’ credibility. Together with the importance of establishing best practices on committing to accuracy on social media, being prepared to quickly react to unpredictable events like an attack by hackers is now an essential part of newsroom management. Crisis plans and procedures help improve security and minimise the risk.

At the World Editors Forum, on June 2-5 in Bangkok, Lisa MacLeod, Head of Operations at ft.com, will talk more about running an innovative, digital newsroom and the importance of being prepared to react in times of crisis.