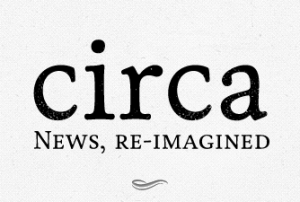 Circa is one of the first mobile-only content projects which, “through comprehensive yet concise news updates paired with a clean, simple mobile experience, redefines how news is produced, delivered, and consumed” by offering digestible summaries of the news for speedy user consumption (see our previous blog post on Circa two days after its launch, featuring an interview with founder David Cohn). The Circa team are currently working towards their iPhone version 2.0 and an Android App is to be released in Q3 2013.

De Rosa has built up a significant online presence at Reuters, responsible for integrating the “ambient wire” that exists on social networks into Reuters platforms, and for training the newsroom to dig out leads and sources on social media. He also helped to build the news organisation’s constant flow of updates on breaking news by utilising live blog feeds, leading to Reuters receiving the “Best Storytelling Innovation” award in 2011. Alongside his social media role, De Rosa hosted Reuters TV’s “Tech Tonic” and was a Reuters columnist.

On the subject of his appointment as Circa’s Editor in Chief, De Rosa commented: “There’s a huge opportunity to present news in a way that’s made for mobile. Nobody is thinking about this more than Circa and I’m thrilled to help move that mission forward.” Circa caught his eye “because it hit on so many things [he] knew were wrong about the way we still continue to present and produce news. Seeing those ideas distilled into Circa was very exciting.” According to paidcontent.org, De Rosa has also hinted that he wants to explore the idea of having Circa undertake its own reporting, rather than just presenting the secondary news stories of other news outlets. He will begin his role in mid-June.