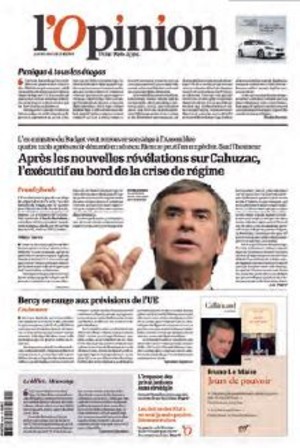 Questioned by Le Monde, he cited a total daily distribution of 22,000 copies. The total number of copies sold per day during the first two weeks, according to Beytout, amounted to approximately 10,000, with around two-thirds generated from kiosk sales and a third from subscriptions (the remainder of the total distribution corresponds to copies sold to airlines and hotels on the basis of negotiated fees).

“These results are about what we projected,” Beytout assured Le Monde. We have now reached the halfway point of our 12-month sales target of 20,000 copies. Our five-year target remains 50,000.”

“It will take some time; we need to firmly establish our brand,” added Beytout, a former journalist at Le Figaro and Les Echos, who explained that the majority of current subscriptions were established through pre-recruitment. However, a publicity campaign due to launch in the coming weeks is expected to attract a new audience of subscribers.

Declining to reveal figures, Beytout informed Le Monde that “on the advertising side of things, we are rather ahead on reaching our target.”

As for the online audience, Beytout cited 100,000 unique visitors during the website’s first week, and is hoping to reach 300-350,000 by the end of the paper’s first month.

Beytout insists that he is not worried by the rather poor viewing figures recorded for some of the online videos produced by his team – most only attracted several hundred views, the record so far set at 4,400 for their interview with UMP party member François Fillon on 15 May. Beytout explained that creating trivial, audience-grabbing videos is not in L’Opinion’s interests. “We need to establish ourselves, and our model will remain that of a paid-subscription website.”

There is still a degree of mystery surrounding the identity of L’Opinon’s investors. As CEO, Beytout possesses around 30% of the capital, whilst the other shareholders have been kept anonymous, with Beytout only informing the media that there are around 15 of them. “Their approach is not political,” he explained, “and it is for this reason that they wish to remain anonymous.” One principal investor, however, has been named as Bernard Arnault, head of luxury goods group, LVMH and according to Forbes, the fourth richest person in the world in 2012.