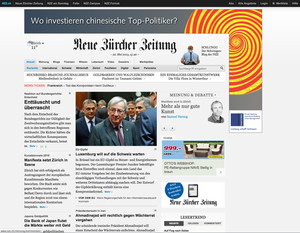 In an article headlined “Wenig Zahlungsbereitschaft (Little preparedness to pay),” the Tages-Anzeiger said an internal NZZ meeting was told that fewer than 1,000 people had subscribed since last October. It added that one source in the editorial department said the figure was below 800.

Tagesanzeiger.ch calculated the revenue from the NZZ’s paywall at about 300,000 Swiss francs (approximately 240,331 euros) – not nearly enough to cover the costs of implementing the wall.

Tagesanzeiger.ch said NZZ spokeswoman Bettina Schibli declined to comment on the figures. She said the paywall is just one part of the paper’s overall strategy. The number of registered users has climbed to about 40,000, she said. “In addition to new customers, the new digital versions are heavily used also by existing customers, who are registering in gratifying numbers,” she told the paper.

In another positive development, the NZZ’s morning newsletter has a subscribership of 129,000, Schibli said.