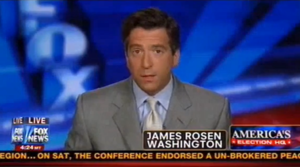 According to The New Yorker, “Ronald C. Machen, Jr., the U.S. Attorney for the District of Columbia, who is prosecuting the case, [against Stephen Jin-Woo Kim, a former State Department contractor accused of leaking classified information to James Rosen stating that North Korea would respond to a UN resolution by testing a nuclear weapon] has seized records associated with two phone numbers at the White House, at least five numbers associated with Fox News, and one that has the same area code and exchange as Rosen’s personal-cell-phone number.”

What has caused most outrage is the fact that Rosen’s newsgathering activities for Fox News have been treated by the Justice Department as potentially criminal acts, something which surely violates the fundamental right of journalists to carry out whistleblowing investigations in an atmosphere of freedom and privacy. The Washington Post yesterday reported that “investigators targeted Rosen, calling him a co-conspirator in an affidavit seeking a search warrant for Rosen’s personal e-mails,” an affidavit which, written by FBI agent Reginald Reyes, accused Rosen of having “asked, solicited and encouraged Mr. Kim to disclose sensitive United States internal documents and intelligence information… by employing flattery and playing to Mr. Kim’s vanity and ego.” Members of the press community, already sufficiently angered by the government’s seizing of AP phone records about a week ago, are claiming that the Justice Department’s suggestion that the Fox News journalist is a “co-conspirator” for seeking out classified information (which is surely the key role of an investigative journalist) threatened to “criminalize press freedoms protected by the First Amendment.”

Fox News executive Michael Clemente said in a statement: “We are outraged to learn today that James Rosen was named a criminal co-conspirator for simply doing his job as a reporter.” He added that he found it “downright chilling,” and that Fox News “will unequivocally defend [Rosen’s] right to operate as a member of what up until now has always been a free press.”

Many feel that the Justice Department have crossed a vital line in equating Rosen’s routine act of journalism with potentially criminal wrongdoing, using this tenuous line of reasoning as an excuse to probe Rosen’s security badge records, phone logs and personal emails in order to uncover details about the source of his 2009 report on North Korea. After all, Rosen was not even charged for the crime in the end, suggesting that the Justice Department did not have sufficient grounds to believe that he was indeed a “co-conspirator.”

Two days ago (20 May), WAN-IFRA wrote to Eric Holder, Attorney General of the U.S. Department of Justice, to express their “serious concern at the seizure of the records of thousands of Associated Press phone calls.” WAN-IFRA argued that this seizure of phone records produced “a profound impact on news reporting in the US by undermining the protection afforded to confidential sources,” and also had implications on the international level, considering the risk that “repressive regimes will use the US example to justify their own actions in exposing whistle-blowers and prosecuting journalists and those who uncover wrongdoing.”

Fortunately, the AP scandal has revived legislation that protects journalists from having to reveal their sources. The Obama administration have said that they will reintroduce the ‘media shield bill’ which was pursued unsuccessfully four years ago, with Obama himself declaring: “I think now’s the time for us to go ahead and revisit that legislation.”

By accusing a journalist of criminal wrongdoing for simply carrying out his routine investigative tasks, this latest scandal involving Fox News has made the passing of the shield bill even more urgent. As WAN-IFRA stated in their letter to Eric Holder, it is vital that Congress “establish clear and uniform rules for when confidential source information is protected and when it is not, to guarantee the protection of journalists’ sources” and hereby to avoid journalists having their work unduly criminalised.