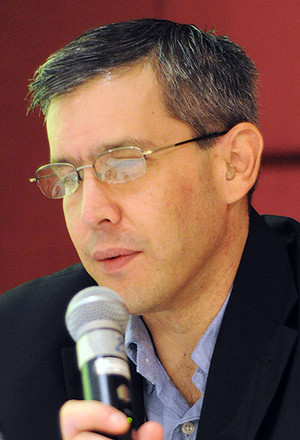 WAN-IFRA: What are the key practical challenges you face?

Garza Ramos: The challenges are very specific to the situation in El Siglo and Torréon, our city. Basically the main challenge is trying to work in an environment in which the violence that has been unleashed by the criminal groups in the region comes from a dispute between two rival gangs. So how do you cover this, knowing that each criminal group can interpret certain coverage as favourable to the other group or damaging to them? They keep a close eye on what the press says about them and about what they’re doing.

As a practical example: let’s say that the army captures one of the killers from one gang. If we put it on the front page, and then a killer from the rival group is captured and we put it on the inside pages, that would be a difference in coverage, and it would be interpreted as if the newspaper were slanted towards maximising coverage of one group or minimising coverage of another. And that’s usually when they try to control the message.

So the challenge is, how do you keep in the middle while trying not to get shot at from either side? What we do is try to cover every story about a criminal act exactly the same, giving it the same space, the same prominence. It’s very difficult because if, for example, one group is doing all the killing, robberies and assaults, and the other is not doing anything, of course we are going to cover all the stuff done by the first group.

We have a page dedicated to crime stories, and we basically publish everything there. Of course, if there is something that deserves more prominence in the paper, a shoot out at a major avenue for example, something that really affected the community – then we give it different treatment, we put that on the front page and give it a better coverage.

We report all the crimes in a basic fashion – just the hard facts, and we try not to go deeper into that: one, out of concern for our own safety, two because maybe that’s what somebody would want and that’s playing into the criminals’ hands.

The media in general risks becoming a spokesman, in the sense that we carry their messages. Some of the most gruesome atrocities that we have witnessed are done for a reason: they are sending a message. So if we in the media play into that, then we are become their spokesman. For example if criminals kidnap, kill, and behead someone, that homicide has a bigger impact than if the person was just killed and his body thrown in the street; the beheading carries a certain shock element to it. We try not to look into this, we try to keep things flat and treat every case exactly the same.

Are there other ways for you to cover the stories without putting yourselves directly at risk?

We do a lot of coverage of the issue created by violence: for example, the social impact, how are communities being affected? We look at school children, businesses that had to close or that are suffering from extortion, and other things like that. We also try to cover the economic impact of the violence: how when cities are perceived as being unsafe, it drives away investment. We try to cover a lot of statistics and see how the crime numbers – numbers of homicides, assaults, robberies and kidnappings – are fluctuating over time. We try to do a lot of testimonials of people who are experiencing the violence first hand and see how it impacts daily life, at work, at school, shopping mall, in the streets, things like that.

One of the first things we did was take bylines out and rotate the reporters who are covering the crime beat so as not to create any identification with specific reporters. We have four to five people who are specialised in that and they have the contacts and the sources so we just rotate them. We live in a metropolitan area where there are basically two cities in one urban core, so one person might cover one city for a month and then switch to the other.

El Siglo’s office after a November 2011 attackWhat are the actual dangers?

What we are experiencing in Torreon is basically two things. One is having the building shot at and attacked – that has happened several times. The other is risking a staff member being kidnapped in order to pressure us into covering or not covering something. We have experienced that in February and other news organisations saw a similar case about three years ago.

In February five staff were taken for a few hours. The new element was that none of them were reporters or editors or photographers actually covering crime news. They were workers from different departments in the company. The most worrisome thing was that we always thought that people who were at risk were reporters and editors – the people dealing with this information. We never imagined that practically everyone can be at risk.

Have you changed your safety policies based on that incident?

We had some protocols in place for reporters and photographers in the street – basically that they had to be aware of their surroundings, to be alert to see if someone was following them. When they want to cover something they had to make sure that there was already a police presence.

We have extended some of those precautions to the entire staff at the company. Especially being careful when you’re in the street. We have also tried to reinforce the security around the building to prevent people from spying on the building and watching people going in and out.

Do you think that there is more you could do to keep your journalists safe?

There is always more. But there is a limit and you have to trust that you are taking the best measures available. The next step would actually be to put a bodyguard with each worker in the paper, but that is totally impractical.

If a criminal wants to do something, he is going to do it regardless of whatever safety measures you take. If we put one reporter under protection there is always going to be one who isn’t. Now that they’ve demonstrated that they can actually target anyone, whether they work in the newsroom or not, they can go and grab anyone.

What we are trying to do, what we are trying to do is consider, is how do we cover this without risking retaliation. There have been some delicate stories when we say we have to publish it this way, but if we do this we risk retaliation. But then you have no choice but to publish, then try to reinforce your safety measures and trust that it’s going to be ok. At some point you just have to stop and trust that your measures are going to work.

What is your key advice for other newspaper editors who are trying to tackle similar problems?

From what I’ve seen in Mexico and in other places that are also seeing waves of violence from criminal groups and drug cartels, each region is different – the criminals in each area have different ways of intimidating the press. So one safety measure in one city might not work at another newspaper in another city.

But what I tell other newspaper editors who ask me is, first you have to identify what is the most recurring attack or form of aggression that the media is suffering in your city. For example in Torréon, attacking buildings is the most frequent, and after that it’s kidnappings. But if you go to Veracruz, for example, the most common form of aggression is homicide, they kill the reporters.

So if you are going to take safety measures you have to tailor specific measures. Protecting against murder is very much like protection against kidnapping. You can take measures like being aware of surroundings and whether anyone’s following you, and ask questions such as: have you been receiving threats, where do you live, do you trust your neighbours, are people hanging around outside your house?

But the basic thing is first you have to analyse the most likely form aggression. We had this debate a couple of years ago when some people said reporters should wear bullet-proof vests – I said that’s useless as reporters are not covering shootouts. Criminals are not shooting at reporters either. If someone wants to kidnap and kill a reporter, wearing a vest is not going to help at all. We have been operating under the assumption that this was like covering a war, and it’s really not like that at all. This requires other more subtle forms of safety measures.

It’s not a one-size fits all recipe. Bt there is a very intense climate of intimidation against the media in Mexico, and we have to be very pro-active in taking measures. Regardless of the nature of the aggression or violence that they are receiving, news organisations have to be very aware of the fact that they have to provide some safety measures for their staff who are at some situational risk, whether they are covering a war or covering crime. We have to have procedures in place.

Javier Garza Ramos will be speaking at the World Editors Forum in Bangkok on Wednesday, 5 June, in a session on ‘Being there… and staying safe.’