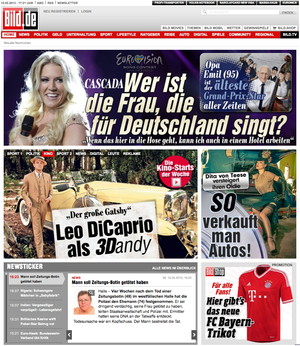 The site reports that Bild – Germany’s largest-circulation daily – will offer a package that includes the printed newspaper and journalistic content on several digital platforms. Horizont.net uses the German term “Markenabo,” which means roughly “subscription to the brand.” Bild has been successful in exploiting its brand in numerous ways, from spinoff publications (Bild der Frau, Computer Bild, and many others) to online commerce (Bild Shop) and others, so the branding of the paid-content package undoubtedly will be inventive.

The report does not give details. It should also be noted that as one of Europe’s largest boulevard titles, Bild has a large proportion of single-copy sales. So it will be interesting to learn the exact nature of the print tie-in.

As for sister publication Welt.de, its paywall follows the New York Times model, with all users able to access 20 articles per month free of charge. Print subscribers have unlimited access. Others have a choice of three packages.

According to Horizont.net, in the first quarter of 2013, Axel Springer derived 318 million Euros in revenue from digital operations worldwide, including classified-ad businesses Immonet and Stepstone. That was the group’s largest single revenue source in the quarter.