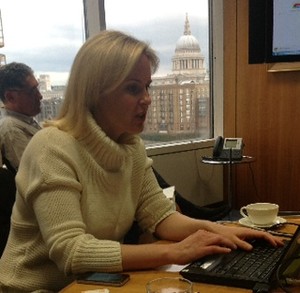 The introduction of this “snapshot”-style news feed is undoubtedly motivated by the current news industry trend for “two-speed journalism” – the recognition that on the one hand, news needs to be delivered in rapid, bite-size form to satisfy the digital reader’s desire for up-to-date, easily-digestible information, but that on the other hand, readers still require high quality, in-depth analysis on key issues. fastFT will offer the immediacy of breaking news that micro-blogging sites such as Twitter offer, but will “[go] beyond the headlines, providing context and commentary in quick, authoritative reports,” according to Megan Murphy, chief correspondent for fastFT (pictured) in a press release published today, 29 May. It will constitute a snappy live news feed, but will also provide the traditional detail and expertise which the FT pride themselves on in a condensed form.

fastFT has a rolling format “with the most recent post at the top for easy reading,” and can be accessed via an icon on the right side of the FT.com homepage, or alternatively on a separate fastFT website. It will also be available via the FT Web App on smartphones and tablets (see paidcontent.org’s article for an idea of what the app will resemble on the iPad).

Posts are classed under various headings including “Economy,” “Markets,” “Companies” and “Comment.” Presented on a clear and clutter-free webpage, the first few lines of each story are immediately visible to the reader, who may then click the “open” tabs to reveal the remainder of the short, concise news items. fastFT is available to all current FT.com subscribers, as well as registered users as part of their eight free articles within the FT’s metered pay model.

The launch of fastFT has been undertaken with the aim of distinguishing the FT within the increasingly crowded business news marketplace evolving around them. News startups are popping up with gathering frequency to meet the average reader’s demand for rapid, on-the-move news coverage. Circa, for example, is a startup delivering short news summaries to mobile devices that has come a long way since its October 2012 launch, yesterday announcing its hiring of Anthony de Rosa, Reuters’ social media editor, as editor-in-chief.

“Nothing drives me more crazy than when I hear FT readers have gone elsewhere for breaking financial news,” Murphy told paidcontent.org, referring to the fact that the FT’s target audience often stray to Twitter and other social media for real-time developments in the financial world. fastFT will aim to cement readers’ loyalty to the FT by offering them “the most important market-moving news as it happens, in any market around the world, in as close to real time as possible.” Speaking to journalism.co.uk, Murphy said fastFT is also the FT’s first entirely content-agnostic platform. “So that means that if a big scoop is breaking elsewhere, and it’s moving markets, there’s no way we can pretend that that is not happening,” she said.

Further developments due to be included in the second version of the platform include a more decisive content filtering system, as well as a reader comment facility.