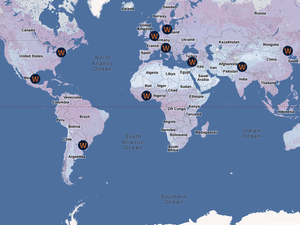 Since its genesis, the company’s vision has been “to discover and translate great stories from the best international publications to build a vibrant, multicultural new source for world news in English.” The unique selling point is the breaking down of language barriers which ordinarily isolate different countries’ media from one another.

So far, so good: at the end of its first two years, Worldcrunch boasts an impressive list of “source partners” – a network of international news publications who sell the licensing rights to translate their articles into English, including names such as Le Monde in France, Die Welt in Germany and La Stampa in Italy.

For Worldcrunch Impact, co-founder Jeff Israely and his team must raise a total of $15,000 before 3 July, otherwise the new project will remain a mere idea – a clever strategy, some might say, since if people donate, they will want to ensure that other people do the same, hence they have an added motivation for spreading the word.

The Kickstarter page identifies the main problem with today’s journalism as the fact that “even the most well-reported stories we produce often don’t go far enough. We may go deep into a problem or uncover something that is wrong or broken; but rarely is the question posed: And so what next? How can we fix that?”

With Worldcrunch Impact, Israely is looking to break into what he terms ‘Solutions Journalism’. Essentially, this means focusing on just one urgent issue a month, choosing to specialize rather than to spread itself thinly. As the Kickstarter page proclaims: “We want to open up a world of solutions to interested readers around the globe, to inspire and empower both concerned citizens and decision makers to address common problems in novel ways.”

So why exactly does Israely think people will be prepared to donate money to help get this project up and running? In a telephone interview with us, Israely identified the main motivation as the fact that “the ethics of what [Worldcrunch does] is something new.” He spoke about the fact that most of the stories we read in the media are “stories about what’s gone wrong,” citing the “what bleeds leads” concept to criticise the way that traditional media report carelessly on troubling issues. Israely conceded that “we have to report on problems and on conflicts” but pointed out that there is “plenty of space for coverage that asks the next question which is, how we do we look for solutions?”

He added: “I’ve never believed that we need to completely reinvent the way that news is covered, but we need to make smart improvements in the way we do it.” Israely feels that potential donors will respect that fact that Worldcrunch Impact’s new type of journalism “is going to be useful and helpful.” Indeed, the goal of the project goes further than just the journalism of Worldcrunch itself – Israely hopes that this “shift in conversation” will catch on with their source partners. “This is also a way for us to encourage them to do more of this kind of journalism that we can then produce in English,” he said.

Israely said that this was an opportunity for Worldcrunch’s current readers to contribute (they introduced a metered model just a few months ago, a paid system offering 15 free stories, the results of which Israely described as “encouraging”). “We’re still a startup,” he explained, “and so like all startups, we need support from the people who like what we’re doing.” Secondly, he is also expecting help from those “who care about journalism and the news business and think that this is one thing that we can do to keep the focus on the professional news business as being a place that produces quality.”

The $15,000 asked for by the Kickstarter campaign would give his team the resources to produce the first 3 proposed Worldcrunch Impact collections (‘Education Innovation’, ‘Future Farming’ and ‘Smart Cities’) in September, October and November of this year. Specifically, the Kickstarter cash would go towards editorial production, obtaining rights (from sources who are not already Worldcrunch partners) and also in developing “an innovative way to present the material,” most probably in the form of an interactive map.

Hereafter, Israely hopes that this monthly study on a specific current affairs issue will become a regular feature on the website.

Worldcrunch Impact’s work would also be translated into other languages in order to increase its visibility. Israely revealed that the project already has two exclusive publishing partners in France and Italy: Le Nouvel Observateur and Internazionale.

Does Israely believe that his team will reach their Kickstarter target? “It’s brand new for us,” he admitted, “and it’s also a good experiment for us to get better at being social and interacting with our readers, and so we’re going to learn a lot from this. It will be interesting to see how crowdfunding might become part of how journalism survives and thrives for companies like ours. We’ve seen it developing around us, and I’ve decided to take our first step. We’re confident that we’re going to reach it, but we don’t know. We’ll see.”

To date, 44% of Kickstarter projects have reached their funding goals – a statistic that is not exactly conclusive. However, if Worldcrunch Impact manages to raise 20% of its funding goal, the odds will be in their favour, since 82% of projects that reached 20% ended up being successfully funded (and of the projects that reached 60% of their funding goal, 98% reached their full target). In the first 30 hours or so since launch, Worldcrunch Impact attracted more than $1000 in pledges.

Crowdfunding might not be a sustainable solution but it has been used successfully for various product launches, in journalism and elsewhere. ‘Matter’, a magazine which produces weekly pieces of “top-tier long-form journalism” on issues in science and technology, ended up surpassing its Kickstarter target ($50,000) beyond all expectations in 2012, raising a huge $140,201. This is an encouraging example for Worldcrunch Impact and other journalistic efforts on the platform.