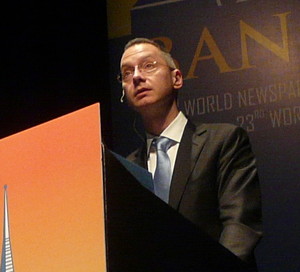 Among the panelists, Boris Lozhkin, President of the UMH Group in Russia, gave an optimistic outlook on the news market in post-Soviet States, which includes 15 diverse countries, led in market size by Russia and Ukraine.

The traditional press in Russia is still growing its advertising base, bolstered by online advertising growth of 35% in 2012, up to $2.1 billion (26% growth in Ukraine). The share of digital revenues almost doubled between 2009 and 2012, up to 19%.

However, digital media typically remain more subsidized than profitable, said Lozhkin. With the growth of the Internet, media brands are now also competing with brands from non-news segments for users’ attention.

According to Lozhkin, as for other diverse news markets, the main challenge is to produce online news content be both broad enough to cater to a multi-cultural audience (in this case within all 15 post-Soviet States), while tailoring that content for each local audience.